It’s up to Christians to Undo the Damage Done

Christianity's reputation has taken a hit these days. We largely have the clergy to blame. Ongoing scandals financial and sexual, not to mention aberrations of historic proportions (like faith-based cultural genocide during the Age of Discovery), have led skeptics to trust a minister about as much as their ex-spouse's lawyer.
Priest Barnabas Powell | 11 October 2011

Christianity’s reputation has taken a hit these days. We largely have the clergy to blame. Ongoing scandals financial and sexual, not to mention aberrations of historic proportions (like faith-based cultural genocide during the Age of Discovery), have led skeptics to trust a minister about as much as their ex-spouse’s lawyer.

My cassock makes me a lightning rod for unsolicited opinions. This isn’t always fun. Who wants to be blamed for anti-Semitism while examining the produce at King Soopers? How to respond? Some have turned to rationalizing retorts.

“No institution is perfect,” they say. “No profession is beyond reproach.”

Some argue that the level of child abuse among clergy is no greater than among teachers, or other comparable positions.

“Don’t blame us,” they shrug. “The world is just as screwed up as we are.”

Somehow, this defense doesn’t satisfy. The priesthood isn’t a job, nor is the Church a mere institution. It is the living perpetuation of the Incarnation, and clergy represent the incarnate Lord. When we screw that one up, we dare not offer any excuse.

Every Christian is a witness to Christ everywhere and always. The only question is whether one is a true witness or false. Do I speak and think and behave in a way that gives glory to the one I claim to serve, or do I make him look guilty by association with me?

This is one reason I don’t have any theological bumper stickers on my car (“Orthodox Christianity: Proclaiming the Truth Since A.D. 33”). Overall, I’m a pretty good driver, but when I do accidentally cut someone off or otherwise disgrace myself, I don’t want God’s name to go down with me (if only I had one of those Darwin fish for just such occasions . . .). 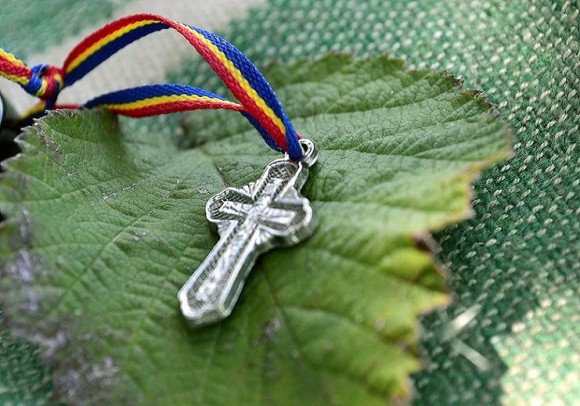 Although I can remain anonymous in my Corolla, the task becomes harder when I step outside. The black robe and big, pectoral crosses that Orthodox priests wear tend to make us stand out. Sadly, even that uniform doesn’t always give me away.

A few months ago, I was riding in an elevator at Parkview Medical Center when a middle-aged lady entered and gave me the once-over. “Gee, that’s a pretty cross,” she declared. Before I could respond, she continued, “Are you a rabbi?”

“A rabbi!” I wanted to shout, “How could you not recognize the cross as Christian?” Then I recalled seeing gangsta rappers with crosses bigger than mine. In the eyes of many, the cross has become bling, a piece of jewelry. It has ceased to be the ensign of the Church — perhaps because some who were carrying it allowed it to fall to the ground.

How can Christians begin to undo the damage we’ve done to God’s reputation? We can start by treating our own crosses as more than mere jewelry. In Eastern Christianity, every believer receives a cross at baptism, to be worn around their neck each day of their lives.

While the newly baptized is dressing after immersion, the priest takes their cross by the chain and drags it through the waters of the font in the sign of the cross, repeating the verse from Mark: “If any man would come after me, let him deny himself, take up his cross and follow me.”

Perhaps we should recite this verse each morning as we rise and put on our cross for the new day, reminding ourselves that it’s not jewelry, but a weapon. With it, we strike neither humanists nor secularists, but a more fearsome enemy: the passions residing in our souls that cause Christ’s name to be soiled on account of our sins.