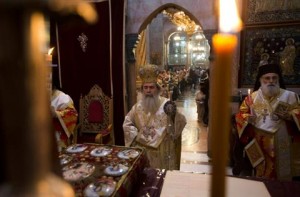 OCCUPIED JERUSALEM: the heads of Jerusalem’s Orthodox churches on Sunday spoke out against the “brutal treatment” meted out by Israeli police to both priests and pilgrims during an ancient Easter ritual in the Old City.

The incident occurred during the centuries-old sacred Holy Fire rite which takes place the day before Easter in the Church of the Holy Sepulchre, with police allegedly hitting a priest and several Egyptian diplomats.

It sparked a diplomatic incident with Cairo which promptly summoned the Israeli ambassador to protest, with Israel’s deputy foreign minister confirming he had apologised.

“We, the Heads of Churches in Jerusalem, watched with sorrowful hearts the horrific scenes of the brutal treatment of our clergy, people, and pilgrims in the Old City of Jerusalem during Holy Saturday,” said a statement from the Orthodox patriarchs and church leaders.

“A day of joy and celebration was turned to great sorrow and pain for some of our faithful because they were ill-treated by some Israeli policemen who were present around the gates of the Old City and passages that lead to the Holy Sepulchre.”

Footage posted on the Internet showed police manhandling a Coptic priest, with one officer locking the priest’s head in his arm. Police said they had opened an investigation.

Although the church leaders acknowledged the need for police to keep order among the thousands of pilgrims and visitors who flock to the annual ceremony, they accused police of “indiscriminately and brutally” beating people.

“It is not acceptable that under pretext of security and order, our clergy and people are indiscriminately and brutally beaten, and prevented from entering their churches, monasteries and convents.”

The statement called on the Israeli police and the interior ministry “to seriously consider our complaints, to hold responsibility and to condemn all acts of violence against our faithful and the clergy who were ill-treated by the police.”

Among the signatories were Greek Orthodox Patriarch Theophilos III and Latin Patriarch Fuad Twal, as well as the leaders of all the other Orthodox churches in Jerusalem.