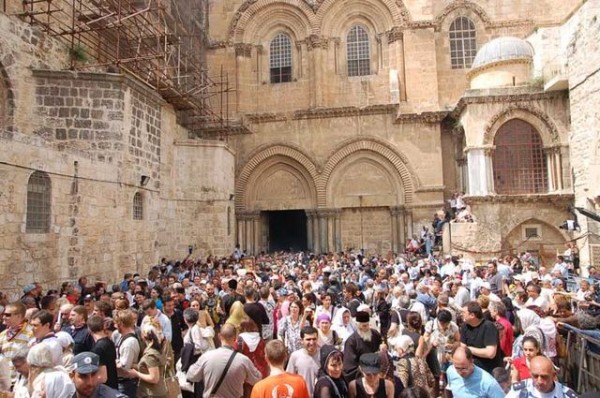 “The celebrations in the vicinity of the Church of the Holy Sepulcher and the Christian Quarter have been conducted according to local traditions and heritage that date back to hundreds of years. None of the successive powers that ruled Jerusalem considered tampering with the traditional celebrations and local heritage,” the Christian groups said in a statement.

The Israeli Supreme Court heard an appeal about the police procedures from the institutions April 10, but no decision was issued.

Yusef Daher, executive secretary of the Jerusalem Inter-Church Center, said that since 2005, police barricades in and around the Old City have prevented pilgrims from reaching the church, especially on Good Friday and for the Greek Orthodox Holy Fire ceremony on Holy Saturday. Pilgrims are kept away from the courtyard next to the church and many only can watch the ceremonies from large screen televisions set up near Jaffa Gate and on the roof of the church.

“They are kept behind iron barricades as if they are in prison,” Daher said.

In the Holy Fire ceremony, the Armenian and Greek Orthodox patriarchs simultaneously enter the Edicule of the Tomb to extract the holy flame and emerge to light the thousands of candles held by the pilgrims packed inside the church. The flame is then transported to different parishes abroad.

Even though the local Christian community traditionally watches the events from the roof of the Latin Patriarchate, some elderly people and families with young children have started to refrain from going out of fear of the situation.

Mickey Rosenfeld, Israeli police spokesman, said the security measures were undertaken in collaboration with the leaders of the various churches in order to assure safe and timely passage of the delegations arriving for the liturgies. Police allow 60 to 100 people to pass at a time, Rosenfeld said.

However, Daher said, disrupting pilgrims on Good Friday often disturbs people who are in prayer and creates tension. He said police have acted violently against the worshippers, leading to arrests during the last three years.

Rosenfeld said more than 20,000 pilgrims were expected in the Old City during Holy Week.

Daher noted that pilgrims are prevented from standing in the church’s courtyard even though a three-meter-wide corridor would be enough for police to pass through in an emergency.

Franciscan Father Pierbattista Pizzaballa, custos of the Holy Land, was unavailable for comment. Auxiliary Bishop William Shomali of the Latin Patriachate of Jerusalem could not be reached.

Father Juan Maria Solana, charge of the Holy See to the Pontifical Institute Notre Dame of Jerusalem Center, told reporters April 9 that because of the limited capacity of the Old City and the Church of the Holy Sepulcher, police had to be strict about the number of people entering. He cited 18th century stampedes in which people were killed.

“I have seen many accidents at the Holy Sepulcher,” he said. “The Holy Sepulcher is overcrowded at these ceremonies and there can be accidents which nobody wants to see. Elementary prudence counsels us not to allow so many people in the Holy Sites.”