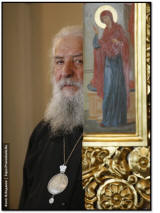 On Saturday, March 16, on the feast of the Commemoration of all our God-bearing Fathers who shone forth in asceticism, the fifth anniversary of the repose of the ever-memorable Metropolitan Laurus – fifth First Hierarch of the Russian Church Abroad – was prayerfully commemorated at Holy Trinity Monastery in Jordanville, NY.

Metropolitan Laurus entered the Brotherhood of St. Job of Pochaev in Ladomirovo in Czechoslovakia when he was 12 years old. He later moved with the brethren to the village of Jordanville in New York State, where he spent the remainder of his life in prayer. From 1975 until his death in 2008, he served as the monastery’s rector. Metropolitan Laurus had a substantial impact on the spiritual life of the monastery, where the brethren and pilgrims continue to feel his presence to this day. “This was his home – in the full sense of the word. Vladyka loved being here,” said Archimandrite Luke (Murianka; monastery rector). “Whenever he came back from a trip, he made it clear that he wanted to be here.”

In 2001, he was elected the fifth Primate of the Russian Church Abroad. In 2007, under his guidance, the Russian Church was united. “I think that was one of the reasons he accepted the position of First Hierarch – because the Sobor of Bishops allowed him to continue residing in Jordanville,” said Fr. Luke. “Vladyka was centered in the spiritual life in a way that was organic for him. He lived the spiritual life and it reflected in every way that he conducted himself. There was an ocean of patience that surrounded him and people felt this when they came into contact with him.”

Upon completion of the Liturgy, the First Hierarch addressed the brethren and assembled faithful and reflected on the spiritual life of Metropolitan Laurus. “We know how rigorous the first week of Great Lent can be in a monastery and, despite his age and ailments, Vladyka prayed at all the services until his repose, which coincided with the Triumph of Orthodoxy in 2008. In this way, the Lord rewarded his pious life and granted him a peaceful and blessed repose within the walls of his beloved monastery.”

After the sermon, Metropolitan Hilarion led a panihida for Metropolitan Laurus, and then visited and prayed in his crypt.