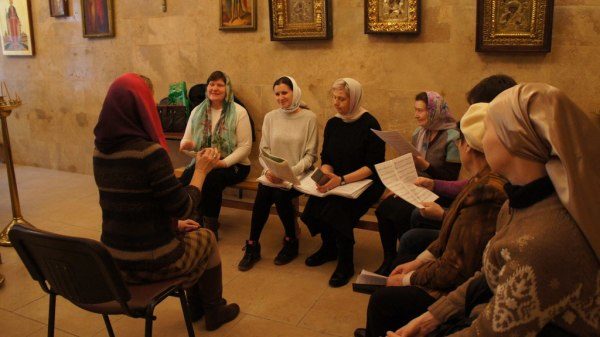 Let us fast in a way that is acceptable and pleasing to the Lord. True fasting is flight from evils, temperance of the tongue, refrain from anger, separation from lustful desires, and from lies, from falsehood and from perjury. The absence of all these makes our fasting true and acceptable. (From Vespers Service on Clean Monday)

Let us fast. When we sing about fasting on Clean Monday, we’ll sing together, a community that fasts together (and feasts together in the Eucharistic cup!) As much as fasting is an individual activity, as we prayerfully practice self-control and bring our own will into line, it’s also a communal fast. We don’t choose the days on which we fast; the whole Church fasts together on Wednesdays and Fridays and through pre-determined Lenten seasons. Indeed, the rules of the fast are shared; we don’t choose what we’ll give up in the Orthodox Church, but instead we are all called to keep the same fast, though we may have to adjust it for individual medical reasons. We are called to fast together.

I’m reminded of the Ninevites. The Holy Prophet Jonah came to them as reluctantly as a prophet can come, with the bad news that God would destroy them. Jonah didn’t tell them to fast, but they knew instinctively that they must:

And Jonah began to enter into the city, going a day’s journey, where he proclaimed and said, “Yet three days and Nineveh shall be overthrown.” And the men of Nineveh believed God. They proclaimed a fast and put on sackcloth, from the greatest of them to the least.

Then the word came to the king of Nineveh; and he arose from his throne, removed his robe, and put on sackcloth, and sat upon ashes.

And it was proclaimed and spoken in Nineveh by the king and by his great men, saying, “Let not the men, cattle, oxen, or sheep taste anything, eat, or drink water.”  So the men and the cattle were clothed with sackcloth, and they cried out fervently to God; and they each turned back from their evil ways and from the wrongdoings of their hands, saying, “Who knows if God shall have a change of heart and turn from His fierce anger, that we should not perish?” And God saw their works, that they turned from their evil ways. And God had a change of heart about the evil which He said He would do to them, and He did not do it. (Jonah 3: 4-10)

The people of Nineveh — not the king, but the grass roots citizenry — proclaimed a fast. As a community, they understood what had to be done. “From the greatest of them to the least” every single person, right up to the king, was clothed in sackcloth and cried out fervently to God. The whole community, not just its leaders and not just a few farmers, but truly the whole community came together in one ascetic offering, and God heard them and did not destroy them (or their cattle).

This is the kind of fasting we undertake at Great Lent: it’s not just one of us headed into the desert like St. Mary of Egypt (though such a fast is a beautiful thing), but this is all of us, crying out fervently to God together.

When we take seriously the communal aspects of Great Lent, it makes sense to gather in groups for some of our activities. We’ll gather at church to worship together, and parishes will host Lenten retreats. We could consider joining prayer groups or book groups too, so that we can support one another in our Lenten efforts, and experience the important role of community in this holy season.