The Church Prepares us for Lent: the Prodigal Son 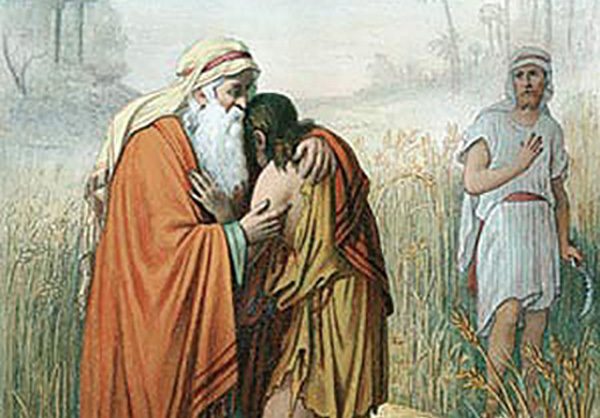 The parable of the prodigal son. V. Kruchkov.

“Oh, it’s Christmas Eve! I wonder – what presents should I give to everybody this year?” You know how well that would not work.

It’s the same with Lent. That’s why the Church gives us the season of Pre-Lent – so we won’t get to Clean Monday (March 11 this year) and say “Already? What shall I do for Lent this year?”

No. Get yourself ready for Lent. Now!

– which this year began on Sunday February 17. The date varies according to the date of Pascha.

Now, the purpose of Lent is not to give up cheeseburgers for a few weeks and then start eating them again. Big deal.

The purpose of Lent is to get our lives back in order, get

ourselves headed in the right direction again. Lent is our annual shape-up time – “spring training” to get us ready for the summer season. We all tend to stray from the straight and narrow, don’t we? In many ways. Maybe it’s our prayer life. Maybe we’re not forgiving or apologizing as we should. Maybe we just need to lose some weight. (That’s not the chief purpose of Lent, but we are responsible to God to care for the bodies he gave us.) Maybe we’ve fallen into a particular sin. Many possibilities. Lent is the time catch ourselves before we go too far and lose control.

So now, plan which virtues should you work on during Lent. Which sins and failings should you try to overcome? How should you fast? What should your Lenten Rule be?

Scripture readings on our four Pre Lenten Sundays advise us how to keep a good Lent. These are the Sundays of 1 the Publican and Pharisee, 2 the Prodigal Son, 3 the Last Judgment, 4 Forgiveness.

During Lent, during life, do not waste your time looking down on others. If

you’re tempted to talk about other peoples’ failings, or even think about them, let alone inform God about them (!), sit on it.

Who do you despise?… (out with it…) …Now, STOP! This may be fun but it’s dangerous. During Lent, during life, deal with your own sins and failings, not those of others.

As we pray in our Lenten Prayer of Saint Ephraim, “O Lord and King, grant me to see my own sins and not to judge my brother.” And you know that the favorite prayer of Orthodox Christians to this day is based on the prayer of the Publican: “Lord Jesus Christ, Son of God… have mercy on me a sinner.”

…which this year is February 24.

Like many of Jesus’ parables, this can be heard at more than one level.

First, this is the story of mankind’s rebellion and the love of God the Father. The Prodigal Son is “Adam” – a name which in Hebrew means “man”, “mankind”. We are the Prodigal Son, created by God our Father to live in a bountiful garden, loved by God, loving God, with all good things given for us. But we wasted it, threw it away, and now

we’re living like this. When will we finally come to our senses and return to God? to our loving Father, who has now come running out to us in Jesus Christ (note the icon to the left), waiting to forgive us and welcome us home.

The parable is also the story of what was happening in the first century. The Gentiles who had strayed far from God were now returning to him, to Christ, to the Church. But the elder brother, the Jews who had never left God, were resentful. “Why is God welcoming them, while we have been faithful.” But were they… was the elder brother now being faithful? The greatest virtue is love – and if they were truly being faithful to God they would have been glad that the Gentiles were coming home.

The third meaning of the parable is the one most relevant to Lent, for it applies to us. We are to play the roles of two of the persons in the parable, and must avoid the third like the plague.

1. You and I, each of us, are already the Prodigal Son. Prodigal means “recklessly wasteful”. You and I have taken our inheritance, the good things God has given us, and have wasted so much of it. When I think of the kind of person I could have become by now, if only… But often I am like the Prodigal Son “eating pig food”, wasting my time on nothing much or worse, when I could be in my Father’s house – walking with God  surrounded by his love, doing worthwhile fulfilling things, being truly happy. It’s time for me to wake up and go home, repent, confess my sin and stupidity. If you think you haven’t sinned in this way, all I can say is you must have mighty low standards. Come to your senses. Head for home!

2. We are also called to play the role of the

Father. When someone has sinned against you, be eager to forgive. The father sees his son returning and hurries out to greet him. In those days fathers who had been offended were expected to wait, and then if the wayward son was abject enough he might forgive. But here the father makes a public spectacle of himself. (In those days everybody lived in town and could see this.) He runs out to the boy, so that before his son can say a word, he knows he is loved and will be forgiven. So you, like the father, be gentle with those who have offended you, quick to forgive.

3. But we should never ever play the role of the elder brother. “Well! I have served you faithfully all these years, and here this son of yours squanders everything, and you throw a party for him! You never threw a party for me! it’s not fair.” The elder brother was right, of course. His younger brother had been a stupid irresponsible fool, and his father was not being fair. But what does that have to do with anything? The Christian way is not about fairness and justice. It’s about love and forgiveness and mercy and joy. If God were just with us, what hope would there be for any of us?

So, summing up, from this Second Sunday of Pre-Lent, here are Three Morals for Lent – and for life, remember.

1. When you have done wrong, like the Prodigal be tough on yourself.

Go to God, go to Confession and say you’re sorry. Get it out. Say it! Is this hard to do? Yes. Is this necessary? Yes. It’s the only way you’ll know with confidence that God forgives you, that he has already forgiven you.

2. When people have wronged you, like the Father be gentle with them.

Make it easy for them to say they’re sorry. Why do people often not apologize? Not because they’re not sorry, but because they fear if they say so, we’re going to jump all over them, reject them. No, be gentle. Be quick to forgive.

We’ll say more about apologizing and forgiving in the Post just before Forgiveness Sunday.

Jesus said there is more joy in Heaven over one sinner who repents “than over 99 who need no repenting”. But who is this one person who needs no repenting? It certainly wasn’t the elder brother. He needed to repent for his lack of mercy and love and for his stupidity – for if he had truly loved his brother he too would have been glad he came home. Instead he was resentful, with what result? Now he’s missing the party! the joy which is the true inheritance of being part of our Father’s house. So now who was being recklessly wasteful? Now who was a prodigal son? Now who needed to repent and come home?

I hope he did. We don’t know. The parable ends there.

But our story hasn’t ended.

We still have time to repent, to forgive, to shape up and join the Paschal celebration. That’s what Lent is for.

The “Lenten spring” is almost upon us. Prepare to enter into the Light!