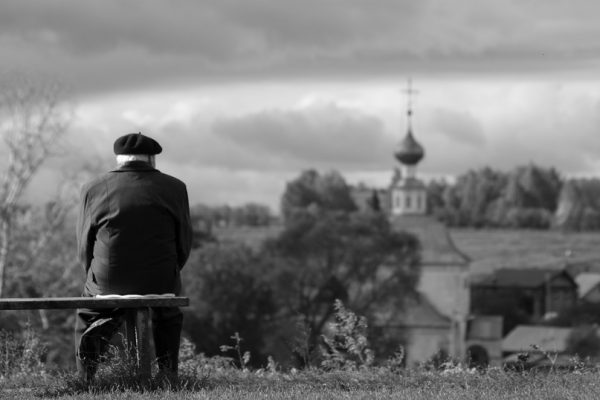 My mother lived to be almost 96, in fairly good shape until the last four years when a minor stroke laid her low and we had to close her apartment, in the knowledge that she would not be able to live alone any more.  She had outlived my father by thirty-five years and had occupied the same second-floor walk-up apartment in Philadelphia for most of those years.  We distributed her possessions among us and gave the key back to the landlord, and old family friend.

Three weeks later my mother returned to full consciousness only to find that she was in a care facility for the aging.  I was with her at the time.  The conversation was simple:  Is this where I live now?  Yes, mother, it is.  We had to close up the apartment because you won’t be able to live on your own any more.  A short pause occurred and then she said, “The food’s not bad.”  Thirty-five years in the same place given up in a flash.   Most of her possessions were in storage in our several garages.  The last of her friends was at a significant distance.  And all she said was, “The food’s not bad”?

One of her best friends was the mother of a friend of mine.  When her husband died, she told my friend that she would move to California to live with her.  My friend said that she was welcome to do so, but wondered how long it would take her to arrange matters and clear out the house.  A while later she arrived with a clutch of suitcases.  My friend wondered what had happened to the rest of the household goods from a house they had occupied for fifty years.  Gave it all away, said her mom, and stepped over the threshold to new life.

The Pennsylvania Germans have a word for what most of us would see as this extraordinary behavior; they call it Gelassenheit.  It means the ongoing ability to let things go and live in the moment.  It means relinquishing your cares and concerns and rolling with the punches life deals you without regret or rancor.  It means relaxing into the circumstances you have at the time.

It is indeed a spiritual virtue, because nobody can do this without spiritual resources.  Most of us get so angry when things don’t go right in our lives.  We fuss and fume and lose our cool over even minor matters, like losing a parking space to the guy in front of us or breaking a wooden spoon.

For my mother and my friend’s mother, who were faithful Christians, the whole thing went back to Jesus.  After all, it was he who said, “Do not take thought for the morrow, for the morrow shall take care of itself.  Sufficient unto each day is the evil thereof.”  Be present where you are.  Accept the conditions of your life, whether foul or fair.  If they are foul, deal with them as best you can.  If you cannot understand the lesson of difficult times, wait patiently and it will be revealed to you.

My mother was an orphan at six and lost her guardian at thirteen.  Life was never easy.  But she lived by the virtue of Gelassenheit, including when my father died abruptly and relatively young.  Teach me to drive, she said, I’m not going to spend the rest of my life in the house.   By letting go she was able to move on.   No dwelling in the past.  No whining about difficult times.  Press on toward the newness of the next day.  God is waiting if only you don’t hold back and try to hold on to what has already gone by.