“The Life in the Christian Church Can not Continue without Women, without Their Labour, Prayers, and Love”

Source: DECR
There is a power of love of which only women are capable. There is a power of faithfulness and ability to follow Christ that has been inherent in women throughout centuries. The Church cannot exist with this power. There will be no church without it. The ministry and salutary mission of the Church of Christ are impossible without the myrrhbearing women.
Metropolitan Hilarion (Alfeyev) | 04 May 2014
The homily delivered by Metropolitan Hilarion of Volokolamsk at the Church of “Joy to All the Afflicted” Icon of the Mother of God in Moscow on 18 April 2010. 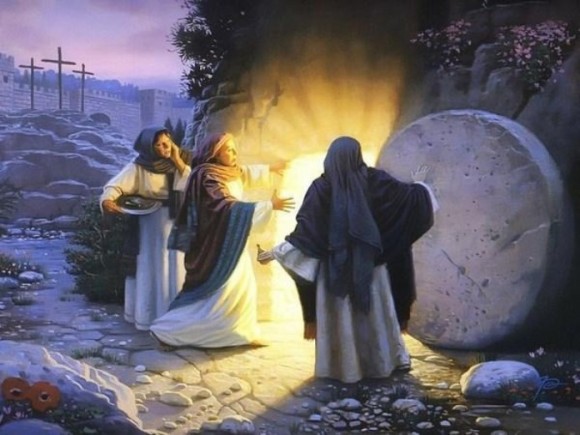 In the name of the Father, and the Son, and the Holy Spirit! Christ is risen!

We continue to celebrate the Resurrection of Christ on this Sunday, as Pascha is celebrated for forty days. Today we commemorate people who extended special love and faithfulness to Christ in the last hours of His earthly life and right after His death on the Cross. This is the Righteous Joseph of Arimathea who went to Pilate after Christ’s death on the Cross and asked for the body of Jesus to bury Him in a new tomb. This is Nicodemus, a secret disciple of Jesus, who, together with Joseph, buried the Saviour. These are the Myrrhbearing Women, who followed the Saviour during His earthly life and mission. They were not afraid of being recognized as His disciples and followed Him up to the Cross on the Golgotha. After His death they hastened to the tomb to anoint His Body with spices and ointments. What did they feel standing at the Jesus’ Cross? They felt that the One Whom they loved, Whom they trusted, upon Whom they placed their hopes, is leaving them forever. It is hardly likely they believed in His Resurrection or could comprehend that the death and passions of the Saviour will open the way to salvation to the entire human race.

We do not know their thoughts, but we know their feeling of infinite love to the Saviour Who was dying on the Cross. They were full of infinite compassion. They felt that they should help Him, but could not do it. When he died, these women, full of grief, thought only of what they could do for Jesus. They could only come to his tomb, to weep there and, if someone could have helped them to roll the stone away from the tomb, to anoint Him with spices and ointments. When they came to the tomb, they found the stone rolled away from the tomb. They went in and did not find the Body of Man, Whom they loved and respected and in Whom they trusted. It was to them, who came to the tomb of Jesus forestalling the dawn, the great mystery of the Resurrection of the Lord Jesus Christ was revealed.

The myrrhbearing women are the women who have been building up the Church of Christ during centuries up to the present through their love, labour, and faithfulness to God. The Lord has placed the apostolic ministry on men, who were His disciples. On the day of Pentecost they received a special charisma, a special gift of grace, which helped them to audaciously preach the Risen Christ, gave them strength to be priests and ordain priests for the whole Church and go to all corners of the earth and preach the Resurrection of Christ. The Lord entrusted them with apostolic ministry and their successors later. The Lord has always entrusted episcopal and priestly ministry to men. The ministry of deacons, as we have heard today in the reading from the Acts of the Apostles, has been entrusted to men, too. That has been and will remain so in the canonical Church founded by the Lord Jesus Christ. However, there is a power of love of which only women are capable. There is a power of faithfulness and ability to follow Christ that has been inherent in women throughout centuries. The Church cannot exist with this power. There will be no church without it. The ministry and salutary mission of the Church of Christ are impossible without the myrrhbearing women.

The Lord has not entrusted women to be priests or bishops. The church hierarchy consists of men, but women are not only assistants of men in the building up of the Body of Christ that is the Church, but they are also assistant of God Himself, of the Saviour Himself. In the history of the Church many women have shown forth not only through the deeds by which the Myrrhbearing women were glorified, but also by apostolic deeds and deeds of preaching. We know that there were women who were called equal-to-the-apostles, as they became equal to the apostles through their labours. They are St. Nino the Enlightener of Georgia, the Holy Empress Helena, and the Grand Princess Olga. There were many other women, who were empresses and rulers, like the Georgian Queen Tamara whom we commemorate today. Al simple women, who were building up the Church by their inconspicuous labour, have shown forth, too.

As we look at people who come to our churches at the present time, we see that there are more women than men among our parishioners for one reason or another. Men work more and maybe they are more busy, but the matter could well be in that women have more love and faithfulness. When a man says he is busy, tired, exhausted, or has other things to do, a woman, who is no less tired and worked than he, will find strength to come to the church of God not only to pray to God and hear the word of God, as Mary did, but also to work for the church as Martha. We know that the Lord has recognized the ministry of both, Martha and Mary, as one of them cared for sustenance and other physical needs, while the other sat at the Lord’s feet and listened to what He was saying. Both ministries are women’s ministries. Both, taken together, are the plenitude of ministry to which the Lord has called women. The more so, the Lord has called women to be creators of a little church – the family. He called women to give birth to children and raise them, thus caring for the future of humanity, which is impossible without women. The life in the Christian Church cannot continue without women, without their labour, prayers, and love.

Dear brothers and sisters, men and women, I congratulate you with our common feast and wish all of us to be led on the way to salvation by our Lord Who has risen from the dead and granted us eternal life. Amen