An exhibition entitled “Two Christianisations of Russia,” about the contemporary life of Russian Orthodoxy in people and situations, has opened in the Moscow metro gallery.

The Metro photo gallery, that has been operating at the Vystavochnaya Metro station since 2005, could rival some of the central exhibition halls in terms of the number of potential visitors. The station is located on the lower floor of the Moscow-City international business center, next to the Expocenter exhibition centre, which is always bustling with life.

Thirty works created over the last 25 years describe the life of the Russian Orthodox Church—from Yakutia to the Antarctic, from Kiev to Vladivostok. They show the charitable life of the church, and portraits of senior clerics, priests and parishioners.

The works of Roman Yarovitsyn show the moment when the relics of Seraphim of Sarov, one of the most venerated of Russia’s saints, an ascetic and stylite, were met at the Diveyevo convent. The relics were then taken on a month-long journey from Moscow to Diveyevo (formerly known as Sarov). During the journey, Patriarch Alexy II conducted special services and sacraments in towns and monasteries.

It was from this moment that interest in Orthodoxy and the Orthodox Church began to grow. At a time when the Soviet state was collapsing, the opportunity to receive spiritual help and comfort in the church, as well as the link with a thousand years of tradition, gave people hope that all aspects of life could be improved and normalized.

A photo from the archive of Petr Zadirov shows the Church of the Holy Trinity in the Antarctic, on Waterloo Island, the southernmost Orthodox church in the world.

Maxim Vorobyov captured the Velikoretsky Procession—one of the Orthodox traditions that were restored in the 2000s. Believers carrying the icon of St. Nicholas the Miracle-Worker walk 93 miles on foot, with their children in their arms, from Vyatka, where the church containing the miraculous icon of St. Nicholas (lost in 1924 when the church was destroyed) was located, to the village of Velikoretskoye.

A collection of photos taken by Vladimir Yeshtokin show contemporary church life: a sister of mercy at a children’s home and the distribution of aid collected by the church for Krymsk, which suffered from flooding in the summer of 2012.

Sergei Teterin captured a service in a church that is attached to a home for deaf and blind children in Sergiev Posad. Father Dmitry Lukyanov holds a service on the shore of the Arctic Ocean.

Smiling children on a frosty day against the background of a church in Yakutiya (photo by Sergei Klimtsov).

The return of a blessed cross from Solovki to the site of the Butovo firing range, where victims of Stalin’s repressions, including priests, were shot and buried in mass graves (photo by Sergei Gubachev).

The exhibition balances official reporting with artistic works, ethnographic sketches and archive photos. Through these portraits, visitors meet living people who are living the life of the spirit. The “Two Christianizations of Russia” exhibition is open through Sept. 10, during the Moscow metro’s regular hours of operation. 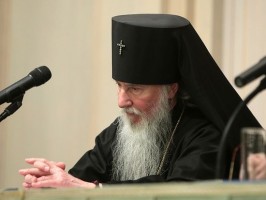 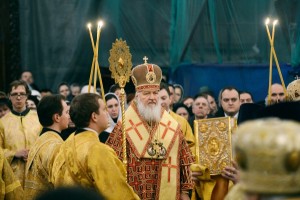 Five years ago, on February 1 2009, His Holiness Patriarch Kirill was enthroned. The clergy discuss…

Most viewed articles
A Great Time to Join the Orthodox Church222
New Jersey Governor Signs Bill Legalizing Abortion Up To Moment of Birth89
The Way of Christ Is The Way of Love76
Metropolitan Hilarion: the Church and traditional confessions have done everything possible to improve the situation in Kazakhstan62
Brooklyn Street Co-Named for Antiochian Pastor Who Served a Half Century There61
First Church in the Antiochian Archdiocese Named for St. Xenia of St. Petersburg Prepares for Feast Day51
My World’s Different47
Patriarch Porfirije of the Serbia: Our Position on the Church Issue in Ukraine Has Not Changed15
4-400×6001
The Apostles’ Fast and Theology1
Most popular authors
Frederica Matthewes-Green222
Pravmir.com team128
Ryan Foley89
Fr. Theodore Stylianopoulos76
Peter Samore61
Protopresbyter Themistoklis Mourtzanos47