On January 28–29, 2014, Moscow’s Sretensky Monastery hosted a conference called “Monastic Tradition: From Ancient Times to Today,” part of the 12th Nativity Readings. The monastery’s auditorium drew over 150 participants from Russia, Greece, Georgia, Serbia, the US, Great Britain and Holy Mt Athos. His Eminence Archbishop Mark of the Russian Church Abroad shared his impressions of the event. 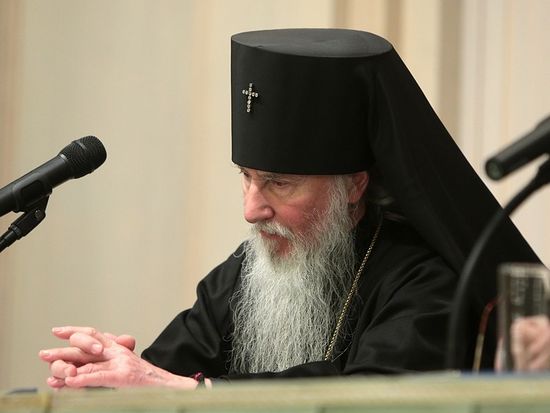 The conference covered the principles and ideals of monasticism more than the state of monasticism today. There was, naturally, an attempt to raise the latter issue, too.

From the words of some participants, one sensed pain about the state of monasteries today. I think that this is mainly related to the situation in Russia, which I do not know well, so I cannot give an accurate opinion. But what I took from these “sorrowful cries,” if you will, from some of the conference participants, leads me to believe that people who enter monasteries now were raised in contemporary Russian society, meaning they lack the heritage, they have lost the tradition, they have no roots. We see this among the faithful who come to the West: the lack of a fertile environment is lacking for the growth of monasticism, and the Christianity of past centuries in general.

It is one thing when one’s parents are religious, and one’s environment is naturally formed according to this ideal, and an entirely different thing when a person comes form a godless family and a similar society. For a person like this, this is all new, and there is no anchor to stabilize him. This is very noticeable in the world today, and it determines the quality of monasticism in Russia today.

One of the bishops said harshly that there are monasteries where most of the monks are former convicts and drug addicts. Of course, this is not the case everywhere, but this element exists, and complicates the status of monastic life overall. This doesn’t mean, of course, that such people should not become monks–on the contrary, they can actually be exemplary monastics. We have examples of criminals who later became saints. The system is broken in many ways, but this does not mean that a given person cannot break free of this.

Considering the words of many of those present, one can reach the conclusion that there are many people today who enter a monastery and leave it right away. That is, people do not set down roots, many of them are distorted by the atheistic past.

This is a negative element in the life of any monastery, when foundations are lacking, when there is not even a small brotherhood or sisterhood which provides a base which would permit roots to take hold. That is why everything else is unstable. This is dangerous. On the other hand, I cannot offer a solution, because I understand that this is a natural result of the period of godless rule that Russia endured. Although it has ended externally, it lives on internally.

Monasteries are like hospitals which heal those who enter. The extent to which a monastery can heal depends on its spiritual strength. To the extent that the Holy Spirit lives in the monastery, so it will be able to heal people. In my opinion, one of the most serious problems facing Russian monasteries, is how to destroy this terrible legacy reflected in all the peoples of the world. It is like a disease which must be rooted out, but how is I understand that it must be done, but the means are unclear. All of society is suffering, not only monasticism, which, by the way, reflects the problem more clearly than elsewhere, since monastics are the product of their society, they don’t just fall from the sky, they come from today’s world. To the extent that this world and today’s society is ill, so are monastics ill for some period of time.

Speaking of the illness that society suffers, I often say that Russia still has idols from the past, statues of murderers and persecutors of the Church. To this day, Red Square is poisoned by a certain corpse, and that cannot but affect the people. You see, when I travel on a street named after a murderer, this has an affect on me. I would rather not take that road. This is a great, anti-spiritual burden that presses upon the nation and poisons it internally. For me it is a great joy that children can see golden cupolas, but on the other hand, they also see the opposite, they are poisoned by names of the streets they walk on. How is it possible to reconcile these two things? They are offered medicine and poison at the same time–and this is reflected in each individual. Sometimes I feel the need to send letters to my brother bishops, but I just can’t bring myself to. Thank God, in Germany, this has been overcome: there is not a single plaza or street with Hitler’s name on it. Censure is absolutely necessary in order to remove that madness and the terrible years of persecution. In Russia it is the opposite: to this day the persecutors are glorified. That is why the people who join monasteries are spiritually sick.

In the West, people are also poisoned, but they suffer another disease, that of dualism, separation from each other. Monastics find it hard to share a room with another person, in fact, it is almost impossible.

First of all, one must be cleansed of the terrible legacy of our past. I do not wish to teach or berate anyone about this: on the contrary, I say this with pain in my heart. In my experience in Germany, the honoring of these individuals has been rooted out, and I understand that Russia has yet to do this. Unfortunately, even church members do not insist upon this, which saddens me.

Another thing that pains me, which I have been hearing about for years, and which was expressed during these Nativity Readings on monastic life, is that many pay a great deal of attention to external actions to the detriment of internal labors and prayer. Divine services and prayers in one’s cell does not occupy the place it should in all monasteries, which is a matter of necessity.

Again, this is because of the legacy of the past: monks must rebuild monasteries, churches, everything that was destroyed. All this consumes a great deal of energy among those who join monasteries, from the abbot or abbess to novices. I do not dare to judge (I never lived in such a monastery myself), but from individual observations one gets the impression that many abbots and monastics find themselves in a rut, when they cease to recognize the value of prayer, or only dream of it, not understanding how they can combine daily work with true monastic labors. This is also a flaw stemming from today’s society.

It seems to me that in the last twenty years, many have determined that the priority is to reestablish the environment for monastic life. I can only propose that this is because of the desire to see quick fruits like the erection of churches and monastic residences. At the same time, alas, one loses the ability or desire to concentrate on contemplative prayer of monastic life. They built and reestablished monasteries and churches in the past, but the priority was always prayer.

One must pray that we will overcome this stage of the development of Russian monasteries, and will once again turn wholly to true monastic labor.