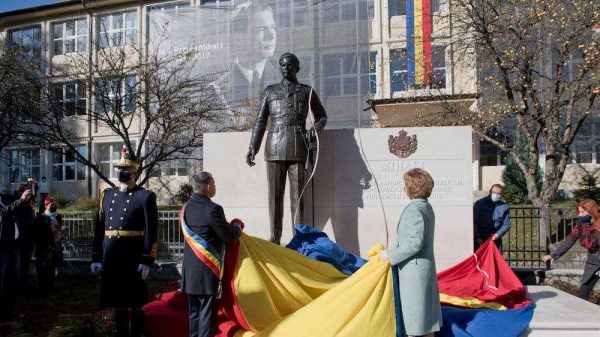 A statue of King Michael I was unveiled on October 25 in Sinaia, marking 100 years since the birth of the country’s last monarch.

Her Majesty Crown Princess Margareta and the mayor of Sinaia, Vlad Oprea, unveiled the statue. A blessing service was officiated by the patriarchal auxiliary bishop Ieronim of Sinaia.

Mayor Vlad Oprea, President of the Romanian Senate Anca Dragu, Minister of Culture Bogdan Gheorghiu, the Special Representative of the Government, Alexandru Muraru, spoke. Cătălina Galer, State Councilor, read out the message of the President of Romania on this occasion.

The ceremony ended with the “March of Carol I” in the interpretation of the Representative Music of the Ministry of National Defense.

The author of the statue is the sculptor Bogdan Ioan, who won the national competition launched on October 25, 2020. The project is realized through a partnership of the Association for Royal Heritage Peles with the Ministry of Culture and the City Hall of Sinaia.

The life-size bronze statue depicts King Michael in the uniform of a marshal of the Romanian Army. The wall that is part of the ensemble includes a quote from the historical speech delivered by King Michael I at the solemn meeting organized by the Romanian Parliament on October 25, 2011:

“The royal crown is not a symbol of the past, but a unique representation of our independence, sovereignty and unity.”

King Michael was born in Sinaia, in Foișor Castle, so that the statue unveiled on Monday represents the monarch’s symbolic return home.