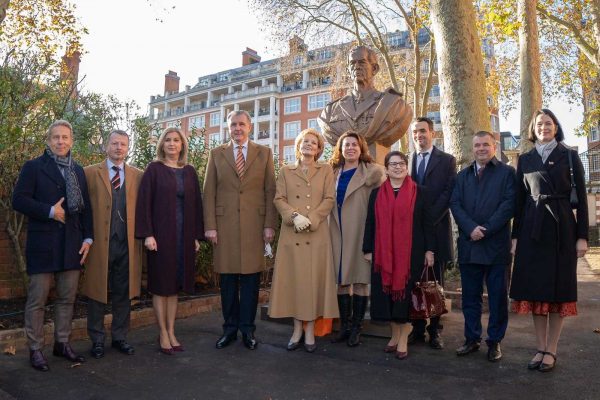 Princess Margareta, the custodian of the Romanian Crown, together with Prince Radu Duda and Laura Popescu, Romania’s Ambassador to the United Kingdom, unveiled a bronze bust of King Michael I of Romania in London during a ceremony on Thursday, November 25, 2021.

Located in the courtyard of the Romanian diplomatic mission in London, the bust was inaugurated on the centenary of King Michael’s birth.

Representatives of the Romanian Royal Council, members of the Romanian diaspora, the director of the London Red Cross, the commander of the Royal Defense College and other British personalities attended the ceremony.

The ceremony included a religious service and a short speech by the Romanian Ambassador Laura Popescu.

“King Michael I of Romania was exceptional. His strength and character, his dignity and moral fibre, his devotion to the people marked and inspired many generations of Romanians,” Ambassador Laura Popescu said.

The bust was made by the sculptor Valentin Tănase, who also created the statue of the sovereign located in the King’s Square in Bucharest.

On Wednesday, they were received by Her Majesty Queen Elizabeth II of Great Britain and Northern Ireland at Windsor Castle. The meeting was private.

Her Majesty Princess Margareta is related to Queen Elizabeth II, and King Michael had close ties to the British Royal Family. After his abdication and exile, King Michael lived with his family in Britain (1950-1956).