Light Up a Fire Inside Yourself and Serve! 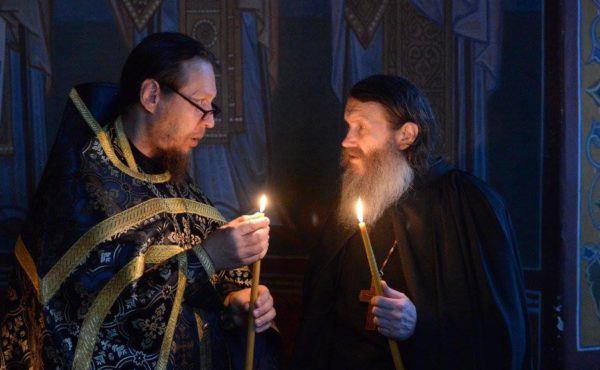 –              Now, let’s have no more of this fashionable nonsense! – the confessor suddenly reacted sternly. What a wonderful excuse for spiritual sloth!  Burnout, indeed!  So, you’re saying that God abandoned His servant, right?  First, He ordained him, then decided to abandon him?  Do you actually understand what you’re saying?

The confessor became thoughtful.  Crossed himself.  Looked carefully at the priest, whose confession he was listening to, and suddenly said:

The cemetery was wet and empty.  Who’d want to be there, especially when it was such a wet spring?  During the few hours of sunshine, people had managed to tidy up the graves and make everything neat in time for Pascha and Radonitsa, but on the commemoration day itself, they had to serve the panikhida and congratulate their departed relatives with the Bright feast of the Resurrection with umbrellas in their hands.

The priest started walking slowly along the central row of the gravesites, reading the inscriptions on monuments and the signs nailed to crosses.

The priest crossed himself.

The confessor walked after the young priest singing quietly, “With the spirit of the righteous…”

They walked up to a new, fresh mound of earth with a big wooden cross.

The priest stopped so abruptly, the confessor nearly walked into him.

The priest crossed himself several times and fell to his knees before the grave, right into the wet grass, which was still dirty from the soil of the recently dug-up grave.

And together they sang, “With Thy saints give rest.”

The priest only shrugged, then added,

St. Peter’s Fast: Another Term in the School of Love

Fasting again: why one should not moan and groan during the Apostles Fast

Ancestral Saturday is a Reminder to Ourselves

Two plus two does not equal four There are two indisputable truths. First: we will all die; second:…