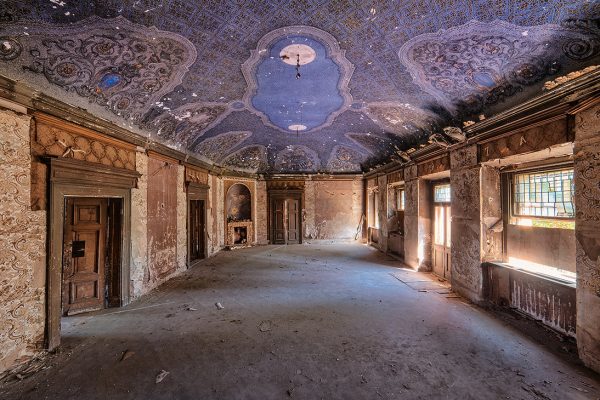 Modernity is in love with time – or with a certain version of time. That version goes under the heading of the “future” and is married to notions of “progress,” “change,” “advancement,” and the like. It is inherently a version of time that appeals to those who are young, in that it privileges the future with promises of dreams and possibilities. Whatever troubles the present can be fixed (we are told). The future is everything. It also has the advantage of not existing – it has no track record to defend. Whatever we may think of the past, be it blame or praise, it can make the singular claim to have actually happened. The past not only took place but cumulatively is gathered in what we experience as the present. As William Faulkner famously noted, “The past isn’t dead. It isn’t even past.”

Over the years, I have enjoyed hiking here in the Tennessee mountains. This part of the state has a bedrock formation of limestone. It is the reason why the state has a number of famous caves: limestone can “leech” out and leave gaping caverns. I am also aware as I walk that the limestone beneath my feet was an ancient seabed. Limestone is largely composed of calcite, which, in turn, is mostly deposited from the discarded shells of sea creatures. It takes millions of years and the pressure of tons of water for those shells to become the rock beneath my feet. Some of the rocks have, over time, been lifted and tossed about by the movement of the earth’s crust, forming the local mountains. Rivers, wind, and rain have carved all of this into the various valleys that mark the region. All of this, of course, is history that took place long before any human being lived here. Geologists “read” that past on the stone that lies around us. It is arrogant in the extreme to assume that our small life-paths across this once-upon-a-time seabed are of greater significance than the mountains and the hills that have witnessed the whole of human history as the come-but-lately that it is.

Human beings matter greatly, and I think it is right that we confess ourselves to be the crown of God’s creation. Nevertheless, we do not exist apart from creation. St. Maximus called us the “microcosm” of creation (“the whole world in miniature”). But this is also to say that we cannot be truly human without at the same time being everything else. In the Creation story, human beings are created last of all, and that seems to be true even when science is the story-teller. To be truly and fully human, it is right that we know the story of the past (or some of them), and recognize that we are utterly indebted to them and that we exist only as the current temporary bearers of their lives and sacrifices.

Though we are not called to “live in the past,” we are most surely called to understand that the past lives in us. The fullness of existence is not measured by the intensity of the single point that is our own private moment, rather it is measured by the extension of our being to encompass the world around us, both in the present and as the present gathers the past into itself.

Popular culture suggests that we should “live large,” by which a hedonistic lifestyle is touted as the most desirable way of being. There is, instead, a “largeness” that refers to the enlargement of the heart by which our life is lived, not as an end in itself, but as but one moment of vast sweep of all time. The virtues which mark such a manner of living are straightforward: love, patience, kindness, humility, and gratitude.

This manner of life can also be described as a “traditioned” existence. It is the recognition that what we have has been given to us. We are not creatures of our own invention. Everything from the “stuff” we are made of to the words we use for our thoughts and the cultural waters in which we swim are given to us. We might very well complain about various details in this inheritance, but we can only do so by using the inheritance itself.

This past-in-present manner of life is normative for Orthodoxy. There is nothing within our modern world that makes the traditioned theology of the Church obsolete. Indeed, it is often far better equipped to speak to many of our contemporary problems than the popular nostrums of our time. It requires, however, a learning that stretches back through time and even languages in order to speak in the largeness that is traditional theology.

The virtues of a “larger” life – love, patience, kindness, humility and gratitude – are, I think, consistent with a slower life. We frequently “rush” about in our world in order to meet the demands of an unforgiving market, or simply to keep pace with the madness that surrounds us. I should note that, although a larger existence is inherently more conservative (being cognizant of the past) it is also patient and kind. The present so-called “culture wars,” regardless of whether the voices are from the Left or the Right, are anxious and shrill, driven by their own inherent insecurity (and the inherent insecurity of modernity itself). Those who live a larger, deeper existence, understand that the past cannot be destroyed. It abides. That which is good within it abides, even if it is interrupted for a season of madness. It abides because that which is good in it is also that which is true. The truth wins out over time because it is true. It is its own argument. The momentary conflicts of our politicized social life cannot give us truth – only the ascendancy of a few minutes.

Slow down. Live long and deep. Drink from the wells God has dug for us.

Face-to-Face – Without Shame or Fear

We are apparently living in the age of the face, and I don’t think it’s necessarily bad.  I…

French Saxophonist Ordained a Priest for…

Claude Delangle, the most sought-after master of the saxophone in the world,…

Never Say “I Will Do It…

Most viewed articles
Archbishop of Australia Does Not Want to Separate People into “Vaccinated and Unvaccinated”150
Peace In Chaos99
Finding God through the Psalms67
French Saxophonist Ordained a Priest for Orthodox Parish in Louveciennes61
The Birth of Our Most Holy Lady: Reason for Spiritual Joy and Exaltation47
In Hurricane Ida’s Wake, Metropolitan Joseph Brings Comfort, Resources to Louisiana Church45
Romanians Offered Bulgarians a Second Vestment of St. Paraskeva and 30 Tons of Food39
Never Say “I Will Do It Tomorrow”: Elder Dionisie of Colciu’s 112th Birth Anniversary30
In Connection with the Tragedy in Perm, Patriarch Kirill Urges to Pay More Attention to the State of Mind of Young People24
Most popular authors
Pravmir.com team235
Archpriest Michael Gillis99
Fr. Theodore Stylianopoulos67
Archimandrite Ephraim of Vatopedi47
Peter Samore45
Ștefana Totorcea39
Aurelian Iftimiu30