Source: Holy Trinity Orthodox School
He "prayed out" for us an answer to how the once-Christian soul of modern Western man could return to the essential, life-giving spiritual laws and live in full accord with them, just like ancient Christians, and could live healthy, fulfilled lives.
Abbot Herman (Podmoshensky) | 23 January 2015 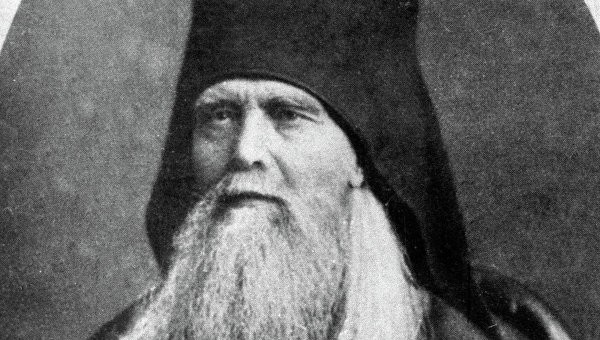 The spiritual life is such a realm into which the wisdom of this world does not penetrate.

An outstanding and extremely prolific writer on the spiritual life, Bishop Theophan the Recluse had tremendous popularity in Russia during the 19th century and well into the 20th. This was during the era of Orthodox Russia, when the whole tenor of everyday life was permeated with the ancient Byzantine philosophy of life. With the fall of Orthodox Russia, the inheritance of Bishop Theophan became obscured by Western free-thinking, which relegated his influence on society to the strict, narrow confines of a persecuted, petrified, frightened “remnant” of Orthodox believers. From that time on, only a handful of writers and outstanding Church figures dealt with the Recluse and his importance; and finally a new wave of ecclesiastical fashion labeled him as an abysmally Victorian, outdated phenomenon and thus dismissed him. Some outstanding modern Church writers wrote good studies on him, but the tyranny of fashion almost destroyed his significance in the view of modern academic theologians, who still criticize him because of their desire to go in step with the world. It is only with the recent rise of interest in ancient Eastern Orthodox monasticism that the name of St. Theophan draws some attention. But yet again, the modern Western mind wants to see in him something else than what he actually was and what he symbolizes to today’s God seekers. They weave into their image of him aspects to which he was foreign. They psychoanalyze his ecclesiology, scrutinize his Christology, and even attempt to present him as a “new ager.” But St. Theophan was and is first and foremost a Church Father for modern times. He was almost our contemporary, one who lived consciously with an awareness of the results of the French Revolution, which had knocked down Church authority not so much politically as spiritually. It is precisely in this — his awareness of the roots of the modern age — that St. Theophan excels almost all modern theologians, pastors, and monastic teachers of spiritual life. He reinterprets ancient patristic wisdom in order to adapt it to needs of the modern unchurched mind, which has been divorced from the Orthodox philosophy of life and even from the rudimentary principles of practical, basic Christianity, and has already been psychologically formed into the mind of a neo-pagan.

St. Theophan was our contemporary, for in his prognostic soul he saw and experienced the modern soul a century ahead of his time. He “prayed out” for us an answer to how the once-Christian soul of modern Western man could return to the essential, life-giving spiritual laws and live in full accord with them, just like ancient Christians, and could live healthy, fulfilled lives. He also foreknew that certain ascetic practices or attitudes are less important for the last Christians, while others, seemingly secondary, should be emphasized. For example, he emphasized the extreme value of the coenobitic concept of “oneness of soul” for the last Christians, devoting the whole fourth volume of his Russian-language Philokalia to that subject.

Foreseeing the disastrous results of the utter secularization of once-Christian society, St. Theophan created his magnum opus, The Path to Salvation, wherein he reinterprets the work of his beloved St. Tikhon of Zadonsk, True Christianity, and sets forth the path which modern man must take. People must get on this path so as not to wander in indecision or float in confusion, not hitting the “target.” Otherwise they will be deceived by false teachers with false understandings of salvation, which produce only more confusion and vagueness, and thus pangs of fear. Orthodox Christianity’s understanding of salvation, set forth by St. Theophan, is precise; it is the narrow path, identifying the right from the left; it is the clear Gospel of “yea, yea” or “nay, nay” (Matt. 5:37). This is what makes it so crucial for today’s confused youth, who are in despair precisely because they lack such an understanding, and are committing suicide by the thousands because of the underlying vagueness of our Poltava (†940). A society in the name of Theophan of Poltava has just sprung up in California in order to promote his teaching, which is also desperately needed by today’s youthful element in the convert movement to Orthodoxy. This is a very welcome and promising sign, because so far almost none of his writings have appeared in English. Righteous Theophan of Poltava, who likes his preceptor Theophan the Recluse was a victim of envy and persecution, is especially important because of his deep personal experience of sorrow and of spirituality devoid of politics. The endearing image of Theophan of Poltava, echoing that of his preceptor, is attractive to the youth also because of the mystical aspect of his prayer. He was seen battling with satan in animal form and was not foreign to genuine divine vision.

My spiritual fathers and instructors, Archbishop Averky, Bishop Nektary and Fr. Adrian, were deeply indebted in their spiritual formation to the holy Recluse Theophan. They read and re-read his voluminous teachings, not only studying his words but engrossing themselves in his advice on prayer and involuntarily likening themselves to him to some extent. These men had actual mystical ties to St. Theophan and possessed insights into the spiritual life that would otherwise have remained tightly concealed from modern man. Their love for him made him alive and vibrant in their lives and teachings: they truly became his disciples, and clung to him as a lifeline. St. Theophan governed the tenor of their archpastoral defense of their flock. They constantly referred to him, and treasured the patristic fragrance of his writings, which stemmed from ancient times. St. Theophan turned them away from the Renovationist hierarchs of today who, disregarding that ancient model, follow a spirit alien to Orthodoxy and install foreign elements into their governance of the flock, cutting them off from the influence of Fathers such as St. Theophan.

I remember how my Fr. Adrian would often quote from St. Theophan’s Commentary on the 118th Psalm, and how once he told me that the mere remembrance of St. Theophan’s Love for the Law of God had at one time miraculously resurrected hope and faith in his soul, whereas before that he had been literally robbed of faith and in deep despair because of the horrible reality of life under the communist yoke. I also recall how Archbishop Averky, a former cell-attendant of Theophan of Poltava, gave a sermon with tears streaming down his face, as he revealed the divine method — transmitted to him through the “Theophanic” line — of softening one’s being with contrition of heart (umilenie), which draws God’s attention and eventually transfigures man’s whole being so that his naked eyes can behold divine light. Again I recall the many times in which Bishop Nektary, as well as his brother Ivan Kontzevitch and his wife Helen (also a disciple of Archbishop Theophan of Poltava), would draw unexpected answers from St. Theophan the Recluse’s writings, which came like flashes of illumination. Sometimes, as in the case of Fr. Adrian, only the remembrance of the power of St. Theophan’s wisdom was enough to dissolve whole dramas of seemingly insoluble problems. Behold St. Theophan’s power to ignite a mystic tie with the other world.

Forming the Habit of Mental Conversation…
St. Theophan the Recluse

Why is it, you ask, that one can pray for so many years with a prayer…

When I came to San Francisco to be close to the saintly Archbishop John Maximovitch, I heard a…