Reverend Yakov Smirnov, or James Smirnov as he is known in Britain, was a Russian Orthodox priest who lived in London in the early 1800s. Unusually, Smirnov was also a diplomat who played a key role in British-Russian relations and the Napoleonic war of 1812.

Russian Orthodox priests held a short remembrance service for Father Yakov Smirnov at Kensal Green Cemetery this week. It coincided with the 200th anniversary of a peace treaty between Russia and Britain which laid the foundations for an anti-Napoleonic coalition. Archbishop Elisey of Sourozh, the head of the diocese of the Russian Orthodox Church in Britain: 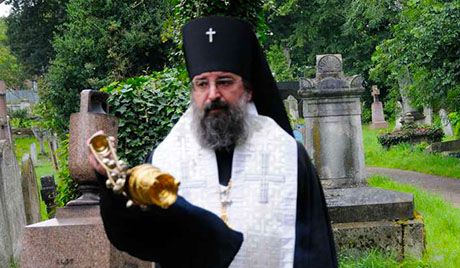 “Today we came because we make memory and pray for priest, James Smirnov, who was dean of the Russian Orthodox community 200 years ago. For us it’s very important to have this memory, to have these relations, spiritual relations especially with those people, those religious leaders who were before us”.

At the ceremony this week priests from the Russian Orthodox Church held a service called a Litia at Father Yakov’s grave. Archpriest Maxim Nikolsky:

“We call it a remembrance, a Litia which is a short Panichida. Panichida is a remembrance service which is celebrated regularly and often for the departed. Today we’re there to remember Reverend James, James Smirnov, and the prayers will be said that his soul may rest in peace and the Lord”.

Unusually for a priest, Father Yakov played an important diplomatic role. In fact he was the only Russian diplomat representing his country in Britain during that time. This was because of poor relations between Russia and Britain which had forced the entire staff of the Russian Embassy to leave Britain. The current Russian Ambassador to Britain, Alexander Yakovenko, explains Father Jacob’s unusual role.

“There were times when the relations between the two countries were not very good. And there was no ambassador here. So basically he fulfilled the duties of ambassador for some years. And the new Ambassador came, first time that was Voroncov, the second time that was another person. But he was somewhere in-between. And of course he kept this continuity. For us it is very important that he was patriot. But on the other hand, he was a friend of the British people”.

When Russia and Britain were in a state of war in 1807 Father Yakov sent detailed reports on political conditions in Britain back to Russia. If he’d be in court, he would have gone to prison. Father Yakov also took care of the Russian community in Britain which included merchants, sailors and students. Konstantin Shlykov of the Russian Embassy in London:

“Between 1808 and 1809 hundreds of Russian sailors were in the port of Portsmouth. Because Russia and Britain were at war he cared about those sailors. He was engaged in negotiations to repatriate them home. And he was taking care of all documents and assets. And he served in the church every day”.

After Napoleon’s invasion of Russia in 1812 Russia and Britain became friends once again. Father Yakov was always very fond of the British people. He often gave letters of recommendation to British governesses and philosophers travelling to Russia to help them adjust to an unfamiliar country. He even dressed in the English style of the time: a long tailed fur coat and a powdered wig. Father Yakov’s memorial in Kensal Green Cemetery was restored with the help of the Russian Embassy and the Russian community in London. And it’s open to the public.