Back in the early 60s I had to catch the subway each morning on the east side of Manhattan, to get to my seminary intern position. From our tiny 6th floor walk-up apartment on York Avenue, I passed by a run down tenement building not far from the mouth of the station. Two or three times a week two guys were huddled against the stoop of the building, passing back and forth a bottle of cheap wine partially hidden in a brown paper sack. On my last trek before moving out of town and back to the seminary in cozy New Haven, I passed those two fellows again. With them this time was a young kid, not more than thirteen. When the sack passed his way, he took a swig, just like the others. Dirty, grubby, smelly and drunk. That’s the way I saw them. When I spotted the boy with the other two, it almost made me cry. I went on my way, angry and non-plussed, but after a while I forgot about it.

You can’t ride the metro in Paris very far at all without some disheveled soul getting on, to serenade the voyagers or torment them with dilapidated instruments, from guitars to trumpets, played too loud and off-key. Then they pass the hat, as though they had actually entertained everybody on board. When they get off at the next station, we expel a collective sigh of relief. Then they, too, are forgotten. As are the Muslim women who line the metro walls, hands outstretched, mumbling in a Franco-Arabic patois while they clutch to their breast someone else’s baby. The children get passed around that way. We all know that, so we dismiss it as a racket. After all, some of them strike it rich, relatively speaking, taking in several handfuls of euros in a single eight to ten hour sitting. It’s easy to dismiss them, to look the other way as we pass by, pretending we’ve got to catch the train that’s just about to signal its departure. We hop through the closing doors, feeling irked and a little ashamed. But, as we remind ourselves, the poor will always be with us… 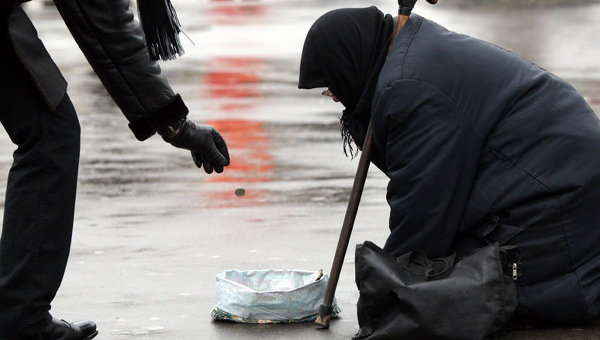 It took a personal encounter for me finally to put a face on some of these lost souls. Sunday mornings at the St Alexander Nevsky cathedral in Paris an old woman used to sit on the ledge by the sidewalk and wait for some exiting parishioner to put a coin into her hand. Her coat was tattered, her hair was unkempt, and her hunched body betrayed her depression. One day we struck up a conversation with her. Her family had fled Russia following the October Revolution, and she had been brought up in France. We discovered that she was highly cultured and spoke several languages. Details she gradually shared with us offered a picture of someone who had suffered immensely. Somehow she had been abandoned, and like many “clochards” of the street, she kept alive in the winter by sleeping on a grate that was warmed by steam from below and by eating whatever she could find, usually in garbage cans stashed behind local restaurants. This woman, though (and to my shame, I’ve forgotten her name), was a person, a presence. She had her own history, her own fears, sacrifices, loves, and occasional joys. There was nothing irritating or aggressive about her to make us want to turn away; she did nothing to make us put up our guard or feel resentful around her. She just sat on that cement ledge after Sunday Liturgy, hoping someone would see in her something other than another annoying beggar. See in her a person—someone down on their luck, unable to do much more than subsist—yet a person.

An old clochard used to hang out near the Patriarchal parish in the rue Saint Victor on the Left Bank, a small storefront church located in what used ” mobile.the-best-casinos-online.info ’s share of gaming revenue rose to 26% from 9% in the same point this past year. to be an Oriental restaurant. It’s filled with icons by one of its most well-known and gifted parishioners, Leonid Ouspensky. One day, somebody in that humble community had the idea, the blessed inspiration, to invite the clochard into a service. As it was related to me, he reluctantly accepted, entered the building and kept to the rear, more or less out of sight. To the mild surprise of some who recognized him, he came back, again and again. Some time later, he was chrismated. The clochard had become an Orthodox Christian, and as far as I know, he remains such today. A life turned around. A lost soul, found.

I’m not sure where I’m going with this, but I think I need a reminder. I need to remember that these people, so often embarrassing, so easily dismissed, are God’s children, loved by the Creator who made them in His own image. And whether they hear it or not, they are called—invited and implored—to journey toward His “likeness,” to become holy as He is holy, to welcome His love into their life and allow that love to transform everything in and about them.

These lost souls are persons, beings of infinite value and worthy of boundless respect, understanding and compassion. Many of them, certainly, would laugh at that, because life is tough, and talk of God’s love and mercy sounds phony and hollow. Or in their drug induced state of numbness they simply can’t relate to it, or don’t want to. But that doesn’t diminish the reality, the truth of it. It doesn’t make them any less human, any less worthy of being treated as we ourselves want to be treated. It doesn’t change the fact that they are souls, lost to the world but never out of God’s sight, never abandoned by the Crucified One.

The next time I pass by some guys huddled in a drunken stupor beside a tenement building, or spot through the commuter-crowd a Muslim woman begging for euros, or get approached by some annoying self-styled musician who holds me captive in a subway car, or run into somebody who simply looks at me in an imploring way that makes me want to avert my eyes, I hope I’ll remember one thing. I hope I’ll remember that every clochard, every beggar, every hard-luck outcast is in some way a reflection of myself. That I, every bit as much as that person, am potentially a lost soul, in constant need of God’s infinite mercy, forgiveness, compassion and love.