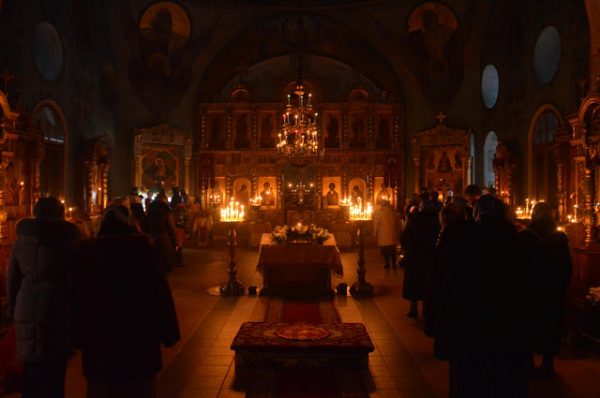 With its multiplicity of rules, canons, and liturgical stipulations, one might be forgiven for thinking that Orthodoxy is primarily about rules and regulations, coupled with a corresponding fear of breaking the rules and regulations. Orthodoxy therefore would then involve going through life fearful of infraction, mistake, misstep, and contamination from the world—“Want to go through life terrified? Good: become Orthodox!”

This is not much of an evangelistic strategy. But thankfully Orthodoxy is not about rules and regulations, but about Jesus, and therefore involves not going through life in a terrified state but with love, peace, and joy. (The three-fold listing makes me think of an old Second Chapter of Acts song by that name, sentimental dinosaur that I am.) One needs, however, to define what one means by love, peace, and joy, for these terms have suffered greatly at modern hands, and no longer mean what they once did. Let us look at the terms one at a time to find out what they really mean.

Love, for example, now is defined as an attitude of indulgence, affirming all others in whatever choices they make, while refusing to condemn or rebuke them for anything. Love now means not only never having to say you’re sorry, but also never making anyone else feel that they need to say they’re sorry. Telling them that they were wrong and needed to repent would be—well, unloving (and increasingly, also socially dangerous.) The problem with this definition is that it makes Jesus supremely unloving, for He began his ministry by saying, “Repent, for the Kingdom of heaven is at hand” (Matthew 4:17), and continued His ministry by telling all sorts of people that they were wrong and needed to repent, even calling some of them (the Pharisees) all sorts of names in the process. But Jesus was not wrong; what is wrong is our current definition of love.

Love is not a feeling or an emotion; it is an act of will. It involves willing our neighbour’s highest good, and his salvation, trying to meet all his actual needs insofar as we are able to do so. Note: our neighbour’s actual needs, not his felt needs or what he may say that he needs. A cocaine addict may say that what he needs is another hit of cocaine, when what he actually needs is liberation from his addiction. Sometimes we know what we really need, and sometimes we don’t. As it turns out, what everyone actually needs is food when they’re hungry, drink when they’re thirsty, warm clothing and shelter when it gets cold out, and God all the time. They will usually always be aware of their need for food, drink, clothing and shelter, but may not know of their need for God. Lots of people aren’t aware of their need for God, which explains the current state of the world.

God created the human heart to run on Him, just as a car runs on gasoline. If one poured lemonade into the gas tank and tried to run a car on lemonade, it would not run very well or at all, for it was designed to run on gasoline, not lemonade. If one tries to run the human person on pleasure and self-will, that human person will not run very well, and society will be filled with violence, deception, crime, danger, war, exploitation of the weak, and destruction of the environment. The Bible calls this foolish substitution of pleasure and self-will in place of God “idolatry”, and the success of the substitution with its inevitable result is abundantly documented for us every night when we watch the evening news. It proves that every person needs not only food, drink, and shelter, but also God.

To love people therefore involves trying to give them whatever they really need. A loving person will therefore offer to the world food, drink, shelter, and the Gospel so that they might reconnect with God and live as they were meant to live. It is does preclude telling a person that they should repent of some of their choices, but rather presupposes it. If someone is sleepwalking and heading over a cliff, a loving person will shout loudly enough to try to wake them up and save them from their doom. Many people, some of them hungry, thirsty, and cold, are heading toward the cliff. To love them means willing their highest good and their safety. Social justice and the meeting of physical need must therefore be combined with Gospel outreach, for the good of both their bodies and their souls.

As the culture war rages around us, this can sometimes be very difficult, as we become tempted to pick sides and become angry. To love involves refusing to allow the violence of that war to enter into our hearts. Our motto must be (to paraphrase a British poster from the Second World War) “Keep Calm and Speak the Truth”. It is not a matter of condemning others for their poor choices, but of warning them of the final result of them. For we are all of us closer to the cliff edge than we think.

When Images Meet Holiness: The Holy…

The Patriarchal Cathedral in Bucharest keeps a very important gift of Romanians:…

And became the best at an international exhibition of inventors

Most viewed articles
Guilt and Shame – What’s The Difference?130
Churches in Wales to Close for Three Sundays in National Lockdown87
Orthodoxy and the Environment81
Grateful for Family Time Amid Challenges78
Metropolitan Hilarion: The Lord Gives Each of Us an Opportunity to Get Near the Kingdom of Heaven Here, On Earth78
Kaliningrad School Student Assembles and Gives Away Computers to Families47
When Images Meet Holiness: The Holy Relics of Saint Demetrios the New46
School Student Invents Gadget that Says When It’s Time to Change a Mask35
The Two Sts. Pelagia of Antioch1
Most popular authors
Pravmir.com team165
Archpriest Stephen Freeman130
Irina Sycheva82
Archpriest Lawrence Farley81
Priest Barnabas Powell78
Aurelian Iftimiu46
Archpriest Michael Gillis1