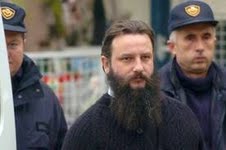 Archbishop Jovan of Ohrid was sentenced to three years imprisonment.

SKOPJE/BELGRADE/BUDAPEST (BosNewsLife)– A Macedonian court sentenced the archbishop of the Serbian Orthodox Church (SOC) in Macedonia to three years in prison on what his denomination and activists called Wednesday, July 3, “false charges” of money laundering, while fourteen co-defendants received suspended jail terms.

Additionally Archbishop Jovan of Ohrid, also known as Zoran Vraniskovski, must handover SOC properties, including church buildings, to the state for allegedly laundering some 250,000 euro ($325,000), his church said. Bishop Marko of Bregalnica, whose civilian name is Goran Kimev, Bishop David Ninov of Stobi as well as fourteen “priest-monks, abbesses, nuns and other faithful people of the Orthodox Ohrid Archbishopric” each received two years suspended sentences for financial wrongdoing, the SOC added.

Among those sentenced are also Archbishop Jovan’s mother and sister, trial observers said. “The court told them that if they repeat the same deed in the next five years they will be facing two years of imprisonment each,” the SOC complained in a statement to BosNewsLife.

Tuesday’s ruling by Judge Ivica Stefanovski of the First Municipal Court of Skopje, Macedonia, is “the seventh imprisonment sentence for Archbishop Jovan, who is a political prisoner in Macedonia already for a long period of time,” the SOC said.

The independent Centar 9, or Center 9 in English, a Belgrade-based Balkan rights group, said the 47-year-old church leader suffered years of persecution. “Once he was in prison because he has baptized a child and another time time because of having a prayer service in a private home,” explained the group’s General Secretary Drasko Djenovic in an interview.

Djenovic said there was “no proof” that those charged were involved in money laundering, a view apparently shared by the U.S. State Department and others concerned about alleged religious rights violations in the Balkan nation.

He linked the ruling to what he called “a court influenced by politics” to Archbishop’s efforts to re-integrate the Macedonian Ortodox Church (MOC) within the SOC. The MOC effectively broke away from the SOC in 1967 under Communism, when Macedonia was still part of Yugoslavia, a move that was not recognized by other national Orthodox churches.

“These kind of staged court trials prove that the courts are being used for political confrontations,” added the SOC in separate remarks. The court confirmed “the state sponsoring and protection of the monopoly of the schismatic Macedonian orthodox church,” the SOC complained.

The latest tensions emerged last year when authorities in Macedonia detained some 19 Serbian Orthodox monks, nuns and other believers and confiscated their passports to prevent them from leaving the country, representatives confirmed to BosNewsLife at the time.

While they were soon released, archbishop Jovan remained behind bars despite international calls for his freedom. “Now he is already for some 1.5 years in prison. The sentence means he will have to effectively serve another 1.5 years behind bars,” Djenovic said.

It was not immediately clear whether the reported crackdown would further negatively impact Macedonia’s efforts to join the European Union and the NATO military alliance.

Macedonia’s attempts to join the organizations were already complicated by a dispute with neighboring Greece over its name.

However the EU has made respect for the rights of religious and ethnic minorities a condition for entry. Macedonia is clearly involved in a “violation of religious freedoms, and persecution on religious basis of the Orthodox Ohrid Archbishopric,” argued the SOC in a statement.

Most of Macedonia’s roughly two million people identify themselves as members of the MOC, though Center 9 said it believes Muslims could become a majority in the coming years. It is estimated that among 2 million people, one third is of ethnic Albanian origin and of a Muslim background.