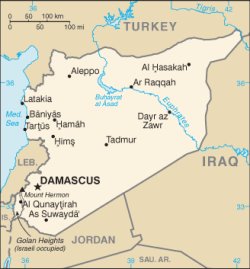 DAMASCUS, SYRIA (Worthy News)– Beleaguered Syrian President Bashar al-Assad was to deliver a speech on Sunday, January 6, a day after rights activists said a shell hit a Christian area of Damascus and a car bomb exploded elsewhere in the Syrian capital.

Syria’s official SANA news agency said Assad was to speak about “developments in Syria and the region” amid new United Nations warnings that over 60,000 people have died in the 21-month old conflict between government forces and rebels opposed to the president’s rule.

Assad has not spoken publicly since a June 3 address to parliament, observers said. His speech was expected to do little to ease minority Christians, who have been in the cross fire with both government troops and rebel Islamic militants attacking them.

“A shell was fired on Bab Tuma,” a Christian quarter of Damascus’s old city where 13 people died in an October car bomb blast, explained the Syrian Observatory for Human rights. It did not say where Saturday’s shell landed or where it was fired from.

Syria’s 1.8 million Christians make up some five percent of the population.

Church officials and rights groups say that many Christians have tried to remain neutral in the country’s escalating conflict. Others have taken President Bashar al-Assad’s side, for fear of Islamists who oppose their faith and accuse them of supporting the regime.

“Foreign fighters are coming to Syria to impose their religious and political views in our country,” French news agency AFP quoted Maryam, who lives in central Damascus, as saying. “These armed terrorists might force me to wear the veil, stop working and stay home,” Maryam added, using only one name for apparent fear of repercussions.

A growing number of domestic and international Islamic militants have joined the Free Syrian Army, the main but fractured opposition force, or set up their own groups, according to Christian and Western officials.

Just ahead of Christmas, Syrian rebels warned two Christian towns in the central region of Hama they will be attacked if they do not evict pro-regime fighters.

Video footage released by the Syrian Observatory for Human Rights and entitled ‘Warning mainly to Christian cities in the province of Hama’, shows seven Islamist fighters armed with Kalashnikovs.

“We issue this warning so that you expel gangs of [President Bashar al-] Assad and shabiha [pro-regime militia] from your towns and convince them not to bomb our villages and families,” said a fighter who identified himself as Rashid Abul Fida, head of the Al-Ansar Brigade in Hama.

“If not, we will immediately attack the hideouts of Assad’s gangs and shabiha.”

Observatory director Rami Abdel Rahman told reporters that the towns of Mharda and Al-Sqilbiya to which the rebel video was addressed both had pre-war populations in the tens of thousands but most of their residents had already fled, taking refuge in the coastal province of Tartus.

Additionally, at least tens of thousands of Christians have fled the war-torn nation. However aging Christians remain holed up in often troubled areas, including a retirement home in the devastated northern Syrian city of Aleppo.

Reporters visiting the building said the Christians have no light, no telephone lines, and little idea of what is happening in the outside world.

The St Elie Rest Home, founded in 1863, is behind a black metal door on a street strewn with debris and rubbish a short way from the front line where rebels and regime forces face off against each other.

Many Syrian Christians have fled the war-torn nation, but others remain behind.

“We welcome everyone who has been abandoned or is in need,” said Sister Marie, 75, the Mother Superior. “This is a place where life can be enjoyed,” she told AFP, gesturing to the 20 rooms adjoining a cloister and courtyard with a fountain and greenery.

Fellow Christians and rebel fighters still ensure they do not go hungry, bringing the dozen or so residents whatever food they can every day.

“If we’re hungry, there’s always something we can eat,” said resident Evan Wehbe, 66, who arrived at the home nine years ago because she could no longer pay her rent.

Yet, festive spirit remains a distant memory for Syria’s Christian minority this New Year after it already faced a second Christmas in the grip of fear of daily violence and rising Islamism.

“We [were] in no mood to celebrate Christmas this year. Everyone around is me is so sad, and the situation is terrible,” said George, a 38-year-old accountant from Damascus. “How am I going to celebrate now that many of my relatives have fled, and we have lost our loved ones? This Christmas [didn’t] look anything like a celebration.”

However, Syria’s Greek Orthodox leader has urged Christians to remain in Syria, despite its bloodshed which the UN called “overtly sectarian.”

Patriarch Yuhanna X Yazigi also appealed to warring parties to renounce violence and to start a process of dialogue.

“We Christians are here in the country and we will stay here,” he said during his first press conference in Damascus since replacing Ignatius IV Hazim, who died on December 5.

July 3, 2013 SKOPJE/BELGRADE/BUDAPEST (BosNewsLife)-- A Macedonian court sentenced the archbishop of the Serbian Orthodox Church (SOC) in…