Mass Grave in Moscow Suburbs is Among Russia’s Holiest Sites

Source: The Moscow Times
More than 20,000 people were executed at the site in a little more than a year — an average of about 50 people per day.
Alexander Annin | 07 May 2014
On May 10, the Russian Orthodox Church will hold its annual special service in the Church of New Martyrs and Confessors in Butovo, a little-known site that is home to Russia's largest collection of holy relics. 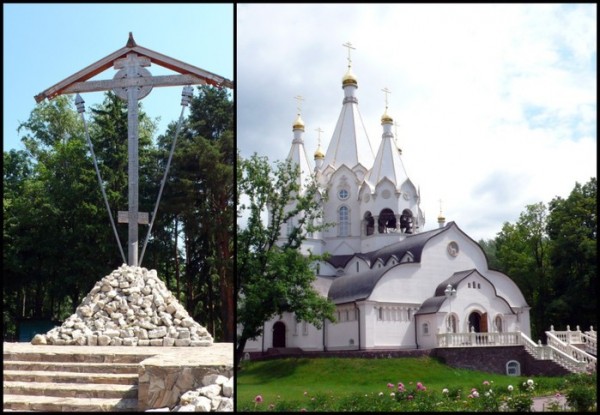 In the forest near old Butovo, about 5 kilometers south of the Moscow Ring Road, lies the largest burial place for victims of Stalin’s purges in the whole Moscow region, a site of mass executions. At the small plot of land known as the Butovsky Shooting Range or “Butovsky Poligon,” about 20,760 people were executed between August 1937 and October 1938. Among this were men and women, the old and the young, people from 70 different nationalities and many faiths and social classes.

Seventy-seven years ago, in August 1937, the head of the NKVD ordered a high fence be erected around a remote five-hectare patch of oak forest glade. The construction was largely ignored by locals, who were told the site would be a shooting range, a rumor that frequent gunfire seemed to verify.

More than 20,000 people were executed at the site in a little more than a year — an average of about 50 people per day. The diversity of those executed was stunning, including South African communists, Polish nationalists, Germans, Hindus, Chinese, Tatars and Jews. However, the site “specialized” in executions of Orthodox Christian clergy, targeted by the Soviet Union as supposedly counter-revolutionary elements in their atheist state.

About 1,000 of the victims were clergy from the Russian Orthodox Church, and about 300 people from that number have since been beatified as saints. After the collapse of the Soviet Union, the Russian Orthodox Church began commemorating the site, establishing a small wooden church on the site in 1996 and a larger church that has been active since 2007. Since the year 2000, the patriarch has led an annual service in the church of the martyrs to commemorate those killed in Butovo.

The most famous person killed at Butovo was Serafim, the Metropolitan of St. Petersburg. Known as Leonid Mikhailovich Chichagov prior to entering the church, in the 19th century he was considered one of Russia’s greatest religious writers, best known for his extensive research on the life of Saint Serafim Sarovsky. Chichagov was also known for his secular social literature works, authoring the book “The Glorious Deeds of the Russian Warriors” in memory of the Russian-Turkish war of 1877 to 1878, in which Chichagov served as an artilleryman. 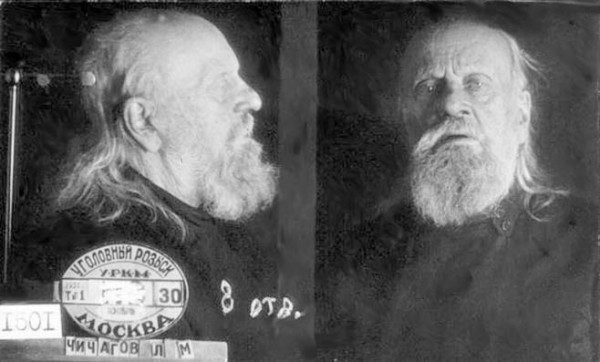 Metropolitan Serafim Chichagov shortly prior to his execution in 1937.

By the time of his execution, Chichagov was an infirm man of 82 living privately in Malakhovka and ill with dropsy. When the NKVD arrested him, it became clear that the old man could not withstand interrogation at the Taganka prison, and so he was quickly taken to the Butovo range and shot.

According to the archives, many high-ranking members of tsarist society were executed at Butovo, apart from the religious figures. Some of those shot at Butovo include Vladimir Dzhunkovsky, governor-general of Moscow; Fyodor Golovin, the chairman of the Second State Duma; Nikolai Danilevsky, the first Russian aviator; Otto Shmidt, an arctic explorer; Mikhail Khitrovo-Kramskoi, a composer; five tsarist generals and representatives of Russian noble families such as the Rostopchins, the Tuchkovs, the Gagarins, the Obolenskys, the Olsufiyevs, and the Bibikovs.

The first church constructed on the site was built by a descendant of one of those executed at Butovo: architect Dmitry Shakhovskoi is directly descended from Prince Dmitry Shakhovskoi, the founder of the Party of Constitutional Democracy of the Russian Empire, who was executed in late 1937.

Father Kirill Kaleda, prior of the Church of New Martyrs and Confessors, has worked in this grim place since 1995, when excavations of the burial site first began.

The shooting range was kept secret until 1995, and a KGB officer was permanently stationed at the site. “What did he guard? Bones … In case someone digs up any by chance,” Father Kirill said. After the site ceased to be used for executions, apple trees were planted on the shooting range and mass graves, and locals used to break in here. Locals say that for half of a century people kept trying to get in despite the danger — trespassers could be shot — because there was no other place where they could get such sweet red apples.

When the secret archives of the NKVD were finally declassified, the true nature of the Butovo range was finally revealed.

Fundraisers for building a wooden church on the Butovo range were held in many Moscow churches, access to the site was improved, and a shuttle bus now runs from the Bulvar Dmitria Donskogo metro station. Also, memorial plaques with the names of the murdered priests were installed around the chapel.

Since 2000 the Russian Orthodox Church canonized more than 300 martyrs who were shot and buried on the Butovo range. There is no other place in Russia or the former U.S.S.R. where there are so many holy relics — even the famous Monastery of the Caves in Kiev holds only about 150 saints’ relics. The new saints have attracted many new donations, allowing for the construction of a much larger new stone church, where children and grandchildren of the newly canonized saints can be seen praying before icons of their fathers and grandfathers.

In an ironic twist of fate, many of the same NKVD staff who worked at the site were later targeted by purges and found themselves executed at the same shooting range — they now lie with their erstwhile victims in mass graves, and their remains are now indistinguishable.

Most viewed articles
What Is Rejected Becomes the Cornerstone116
Hierarch of the Jerusalem Patriarchate Speaks in Support of His Holiness Patriarch Kirill84
His Beatitude Patriarch Theophilos III and bishops of the Russian Church Abroad attend a concert marking the 150th anniversary of the birth of Sergei Rachmaninoff in Jerusalem84
Utah Church Prepares, Welcomes All for Consecration82
The Savior of the Hopeless, or Is It Possible to Be a Good Person and Not Be Saved?69
Supreme Court Overturns Roe v. Wade in Mississippi Abortion Ruling59
The Forgotten Virtue of Stability48
‘The post-Roe generation’: Pro-lifers set their eyes on heartbeat bills, chemical abortion bans45
Most popular authors
Pravmir.com team250
Archpriest John Moses (+2019)116
Alexander Tkachenko69
CBN News59
Hieromonk Gabriel48
Ryan Foley45