The New Martyrs and Confessors of Russia: An Example of Great Faith and Love

Today the Holy Church celebrates the Synod of New Martyrs and Confessors of Russia, who suffered during the godless persecution of 20th century. On this day we should listen to their appeal, and look upon the example they have set for us.

Every Saint has a special grace to help us in with our needs and circumstances, ones that he faced in his own life, and the lives of New Martyrs are so close to us! Let’s look at the history of Russia. During the last 300 years, She has seen continuous trials, neverending temptations. From the reign of Peter I to the First World War, the population of Russia grew more than ten times, but the number of Orthodox churches in that same period increased only four times, and half of this increase occurred during the reign of the last two Russian Tsars.

If we look at the state of monasticism, this soul of the Church, we see embarrassing figures. There were 1,200 cloisters in the year 1701, their number was reduced to 380 by the second half of 18th century, and only at the end of the reign of Tsar-Martyr was it nearly restored (to 1025). The number of monks decreased from 25,000 to 6,000, but in the time of the last Emperor it was already 95,000. Take note: we see the same thing today – the same great increase in the number of churches and cloisters after a persecution. But it is only an external increase, which doesn’t yet reach the necessary inner depth. We are still far away from the spiritual attitudes of our forefathers. Unfortunately, the period of Russia’s revival at the beginning of 20th century and in our days has one more feature in common: now, as well as then, along with the wonderful revival of spirituality is developing the so-called “freedom” – a freedom for sin. Now we face massive propaganda of violence and lechery. The same took place in the beginning of the last century, when such kind of “houses” were opened, about which “it shames even to talk about.” Even then, mass media launched attacks against the Church, against the legitimate government, using money from Russia’s enemies, including nations warring with Russia, like Germany and Japan. 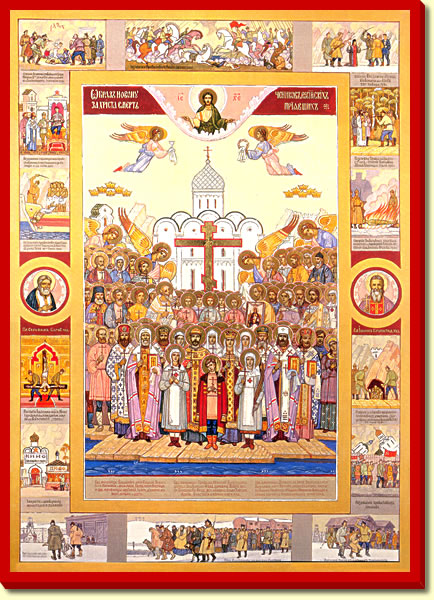 Now we don’t know whose money they use, but mass media has the same methods today. It broadcasts slanders against the Church, the clergy, and the government. This comparison leads us to fearful forecasts – will past persecutions be repeated?…Drunkenness, smoking, playing cards, and gambling, different kinds of occultism, spiritism and theosophy were also disseminated in those times. At those times, money began turning into the height of all virtues. The Church also was infringed upon by these dreadful occurrences of spiritual degradation. For example, when the viewing of Pushkin’s body took place all day and all night long in church, the floor after the funeral was bestrewn with cigarette butts. In such conditions of struggle between revival and depravity, struggle between sanctity and temptation, our New Martyrs represented an example of personal victory over sin.

If not, if they were liable to this sins themselves, then God would not honor them by shedding their blood for Him, He wouldn’t have crowned them with a martyr’s crown. We make sure of it again and again while studying the lives of each of the New Martyrs and the biographies of those people who were in enmity with them. Everyone who exemplified weakness betrayed the Church, the Tsar, and the Motherland, collaborated with Bolsheviks, or left into different schisms and dissents.

The New Martyrs presented us an example of great love, love for God and for the people. How did they love God? First, it was displayed in their prayer, in the divine services. We constantly call upon all of you to offer up morning and evening prayers. But could you read these prayers from beginning to the end without a prayer book, by heart? And what if we would happen to be imprisoned, and we’d have no books? Some of you answer – we would read the Jesus Prayer. Yes, that is certainly a way out. But our New Martyrs knew from memory not only the everyday prayers, but also offered up church services by heart – the evening service, morning service, and even the Divine Liturgy.

You can see that we’re serving the Divine Liturgy on the Altar table. In the prison camps, there were instances of martyrs lying down, and the Liturgy being held on his chest, as if on a live martyr’s relics.

Could you pray while knowing that tomorrow you would be shot down? The New Martyrs prayed right at the moments they were shot. And a father with being shot with his sons said; “Shoot my sons before my eyes, that I may pray for them, and then shoot me” (Archpriest Philosoph Ornatsky). We should follow their example, and imbue our soul with prayers, so we could pray under any circumstances.

The New Martyrs have given us a great example of love for people. Love your neighbor as yourself, the Lord says. And we often ask “and who is my neighbor?” For the New Martyrs, these neighbors were criminals, and thorough scoundrels among them. Prison chiefs often deliberately placed the believers among the very scum of thievish society. The martyrs suffered not only from guards’ tortures, but also from beatings and malicious harassment by these people, who seemed to lose the image of God completely. But exactly in such circumstances they prayed and offered up the divine services by heart. And the greatest possible miracle happened, the miracle of the transformation of human souls. The recent torturer began to love imprisoned priests or bishops, care for them, feed them. The lives of nuns, women, in such conditions were especially terrible. But when they were set free, the people who left missed them and cried. And we can’t love even our friends, not to mention enemies, with a little piece of such love!

Many thousands of New Martyrs are canonized. Now they are about one thousand and a half, and their number constantly grows.

That their suffering might not be in vain, that their deed might not be futile, we, the small flock of faithful Christians, though sinful, but trying to attend the church services, confess and receive the Sacrament, should necessarily make use of this example of love. I call upon you once more to learning the morning and evening prayers by heart. Surely, we hope that the Lord will deliver us from persecution for the faith, as we are too weak, and hope that we will not be imprisoned without our prayer book. But every one of us has to die. Nobody will escape it. In the very moment, when our eyes won’t see, and our legs won’t walk, could we pray then? Or would we think only about our aches? Could we not be capricious and take our relative’s concerns for us with gratitude? Could we offer up to the Lord not complains and reproaches, but constantly repeat only “Thank God for everything,” even on our deathbed???

Let us pray to our New Martyrs more diligently, and may they help us in the most crucial moments of our passing over into Eternity! And may God grant us – like them – a peaceful demise. Yes, it may startle you to hear it – the Martyrs had a peaceful death!

We should not place confidence in the peace around us, but we should have this peace inside us, like our Saints have, even in the hour of martyrly death!

This homily was reproduced for the official website of St. Nicholas and St. George Churches of the Kuban Cossack Voisko Abroad in New Jersey from the website www.moral.ru

Synaxis of the New Martyrs of Butovo