Media: Greek Church to Decide on the “Ukrainian Issue” in October

Source: Union of Orthodox Journalists
The Synod of the Greek Orthodox Church decided to discuss the issue of recognizing the "Orthodox Church of Ukraine" at the Council of Bishops in October 2019.
Pravmir.com team | 29 August 2019 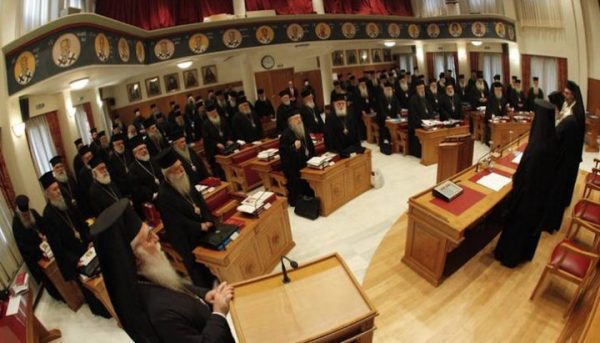 The session of the Holy Synod of the Greek Church. Photo: Romfea

The Holy Synod of the Greek Orthodox Church decided to postpone the consideration of the OCU’s “autocephaly” to October 2019 when the Bishops’ Council of the Greek Church is held, reports  “Romfea”.

On August 28, 2019, at the Church of the Holy Archangels in the Petraki Monastery, Athens, the 162nd session of the Holy Synod of the Greek Orthodox Church was held under the chairmanship of Archbishop Ieronymos of Athens and All Greece.

According to “Romfea”, the results of the recommendations of the Special Commissions on the Ukrainian issue were discussed at this session.

Exclusive information from the resource says that the issue of recognition of the new Ukrainian Autocephalous Church will be dealt with by the Holy Synod of Hierarchy.

At the same time, “Romfea” notes that “the Ukrainian issue is not included in the agenda of the October Council of Bishops”, which was formed in July.

In addition, according to Greek journalists, Archbishop Ieronymos “once again has shown that he respects the Synodical system, thinking that such a subject wants the decision of the whole Hierarchy”.