n the Orthodox East, to reiterate, morality was therefore never seen simply as a “code of behavior” that designated one as being either “righteous” or “unrighteous,” but as a rudimentary guide (i.e., a “pedagogue”) that points towards the divine beauty that has been diffused throughout creation by the One Who first created it and continues to sustain it. This is why, when speaking of discipleship, Jesus uses the word “perfect” instead of the word “moral.” “If you want to be perfect, go and sell all that you have and give it to the poor, and come follow me.” (Matthew 19:21). Here, the perfection He speaks of has to do with the “proper end” of human life as being exalted to its proper place in the Kingdom of God by sharing in the holiness of God.
Archpriest Paul M Jannakos | 05 October 2011

Lately, there has been much discussion within Orthodox theological circles about the change Western society has undergone within the last 40 years with respect to morality. Many things that were once viewed as being inherently immoral, such as gambling, fornication (sex outside of marriage), homosexuality, and abortion, are now viewed as being acceptable, and in some cases, outright laudable. And many Christian denominations have followed suit by adopting the stance that modern Christians should adopt this “new morality” of secularism lest we be judged by the world as being culturally backward and irrelevant.

As a parish priest, I believe that we as Orthodox Christians must respond to the moral confusion of our age by examining the rich spiritual tradition bequeathed to us in the Church. Contrary to what many people might think, the answer to this problem is not an answer that lies in the uniquely Western dichotomy of conservatism verses liberalism (a dichotomy that is foreign to the mind of Orthodoxy); rather, it has to do with the Church’s understanding and experience of Theosis and beauty.

Theosis is the teaching that as human beings we have been created for a life of perfect and unending communion with God, and that this divine life – revealed to us in Christ – is the very dynamic and substance of salvation itself. By uniting ourselves to Jesus Christ, the Son of God made flesh, we receive the gift of the Holy Spirit, Who in turn, reconciles us to the Father. This is the New Testament’s fundamental formula of salvation: “in Christ, through the Spirit, to the Father.” Through a life of ongoing repentance and by attaining the virtues, our communion with God is continually perfected from “one degree of glory to another.” According to the Holy Fathers, it must also be said that as human beings we do not become fully human until we have achieved the state of Theosis, the mystery by which we “become by grace everything that God is Himself by nature.”

It is from this view of Theosis that we see how morality cannot be properly understood as a philosophical category that stands on its own, so to speak, irrespective of the spiritual tradition of the Church. Instead, we see morality as a signpost that points beyond itself to something infinitely greater: to the need for us as human beings to share in the beauty of God. When Christ stated to His dumbfounded apostles that “unless your righteousness exceeds the righteousness of the Scribes and Pharisees, you cannot be saved,” (for the righteousness of these Scribes and Pharisee was deemed the ultimate righteousness of their day), He was speaking of the ability we have as humans to transcend the simple morality of “having to always be on the opposite side of wrong” by allowing ourselves to vested with the glory of God.

Once again, the point here is that it is not good enough, at least in the eyes of the Church, to be merely moral in the conventional sense of the word; no, we must instead, become transfigured by the beauty of God Himself, which is a beauty that has been revealed to the world once and for all in the Second Person of the Holy Trinity, Jesus Christ. Conversely, when one loses sight of the high calling of Theosis, morality then becomes an absurdity, for apart from the vision of the God-man Christ Jesus, in Whom, from Whom, and through Whom we enter into Theosis, the very notions of “good” and “bad” become meaningless and vacuous.

Furthermore, this allows us to see the idea of “immorality” in a more proper light, that those immoral thoughts, intents, and actions which are harmful to us as human beings are this way because they stand as obstructions to the goal of Theosis, and not simply because they are a betrayal of some external, civil moral code that demands a fitting punishment. Just as a long distance runner must shed himself of everything that hinders his race, so those who are seeking Theosis must divest themselves of all the sinful passions that hold them in check. “Therefore, since we are surrounded by so great a cloud of witnesses, let us also lay aside every weight, and sin which clings so closely, and let us run with perseverance the race that is set before us, looking to Jesus the pioneer and perfecter of our faith, who for the joy that was set before him endured the cross, despising the shame, and is seated at the right hand of the throne of God.” (Hebrews 12:1-2).

In the Orthodox East, to reiterate, morality was therefore never seen simply as a “code of behavior” that designated one as being either “righteous” or “unrighteous,” but as a rudimentary guide (i.e., a “pedagogue”) that points towards the divine beauty that has been diffused throughout creation by the One Who first created it and continues to sustain it. This is why, when speaking of discipleship, Jesus uses the word “perfect” instead of the word “moral.” “If you want to be perfect, go and sell all that you have and give it to the poor, and come follow me.” (Matthew 19:21). Here, the perfection He speaks of has to do with the “proper end” of human life as being exalted to its proper place in the Kingdom of God by sharing in the holiness of God. 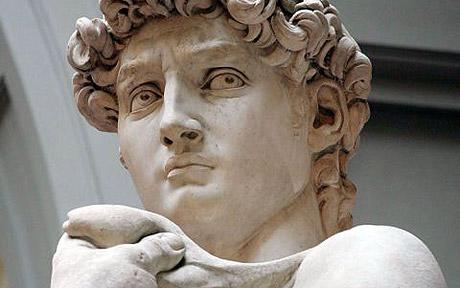 Michelangelo, the greatest artist of the Italian renaissance, offered to the world his greatest gift of beauty by once carving a statue of King David – whom we should remember was a prefiguration of the kingly glory and power of the Messiah. Michelangelo created his statue by using a series of chisels, from the largest down to the smallest, first removing the larger and sizable chunks of stone, then removing smaller shards of stone, and then removing successively smaller and smaller fragments, in order to leave an image that remained “untouched” by human hands. Morality for us as Christians is the first, rough chiseling that eliminates that which is foreign to our nature so that Christ might continue to perfect the “untouched” image that He is creating each of us to be. We thus seek to work along with the grace of God to overcome the passions of pride, selfish-ambition, wrath, lust, sloth, greed, envy and gluttony, so that the “David” that lies in all of us might come to life.

Which leads us to realize, hopefully, that the question morality addresses is not, “How good must we be?” but “How beautiful can we become?” “For Thou, O Lord, art more beautiful Than all the sons of men.” (Lamentations, Great & Holy Friday).

Obedience and Faith – A lesson from the Centurion

“Truly, I say unto you, that not even in Israel have I found such faith.” Christ spoke these…

A Word of Warning, A Word of Hope. On the Parable of the Sower

The Meaning of Ritual, or “Hurry up and get on with it, this ain’t no opera!”