The Meaning of Ritual, or “Hurry up and get on with it, this ain’t no opera!” 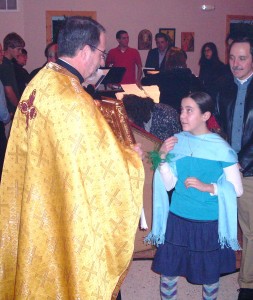 Anyone the least bit familiar with the Orthodox Church knows that repetition is a key feature of its worship.

We do things over and over again, and then, we do it yet again – one more time. As we find in the Little Litany, “Again and again in peace, let us pray to the Lord.”

For many Americans, this seems excessively pedantic, if not outright silly. As one protestant visitor to my Church asked, “Why do you people say ‘Lord have mercy’ so many times? Don’t you believe that God hears you?” The answer, of course, is that we do believe that God hears and accepts the prayer of all those who offer their prayer in faith and in purity of heart. But, because repentance is not an instantaneous event, (though some would like to think so), and because we are so slow to learn the deeper meaning of the prayer, “Lord have mercy,” (which is the essential prayer of the Church), we are required by the Holy Spirit to continue saying it until our dying breath. The testimony of the Holy Fathers bears this out.
This is the reason why we repeat so many other things within the life of Church, not only its prayers, but its gestures too. We make the sign of the Cross and bless ourselves by doing so an infinite number of times. Can we ever sign ourselves with the Cross enough? Obviously not, at least for those who are truly serious about picking up and carrying their crosses. We venerate the icons by bowing before them and kissing them with tender lips and hearts. Will there ever be a time when we have kissed them “enough?” No, of course not. Because it is kind of like saying, “Will there ever be a time when mothers and fathers can kiss their children enough?” Or, “Will there ever be a time when husbands and wives have kissed each other enough?” One need not even answer such a question because it is plain for everyone to see.

Examples of this sort are plentiful even in the so called real world. We human beings do things on a repeated basis not only because it is practical, but because these repeated things convey value and meaning. Which just happens to be what a “ritual” is. Rituals are words, gestures, and motions (very often combined together all at once) that convey worth and significance. Let us illustrate.
Young men who court the women they love offer them flowers – a ritual of admiration. Those who are about to prepare themselves for a job interview dress up in their very best (“for men, no slip on shoes, laces only!) – a ritual of self-worth. At graduation, students dress up in cap and gown and receive a diploma from the hands of their instructors – a ritual of completion and transition. When the President of the United States enters into a room, those in attendance stand up from their chairs – a ritual of respect for the office (not the person) of the presidency. As a child in elementary school, I remember beginning each day in class by reciting the Pledge of Allegiance – a Jeffersonian ritual of absolute faith in the principles of democratic government. Examples of this are numerous.

Yet, over the years, I have noticed that when it comes to the rites of the Church, many people are unfairly prejudiced. “It looks like spiritual robotics to me,” is what they say, or “You’re just going through the motions, along with all that religious mumbo-jumbo.”

Excuse me? Did I hear that right? Going through the motions? Religious mumbo-jumbo?

I think it is high time to set the record straight. First by saying that anyone, religious or not, can go through the motions and make it all just a bunch of mumbo jumbo. Because it is not the ritual that is dead, but the heart and motive that lie behind it. I’ve been to many baseball games where the singing of the National Anthem (yet another ritual!) is performed in an utterly dreary, perfunctory manner. “Hurry up and get on with it will you, this ain’t no opera!”

So, just because there are some who fail to understand the meaning of the Church’s rites doesn’t mean that the rites themselves are wrong. On the contrary, it is the human beings themselves that are “wrong.” Isaiah the prophet spoke well about this when he said, speaking for the Lord Himself, “These people, they honor me with their lips, but their hearts are far from me.” (Isaiah 29:13).

The Church bids us to do many things over and over only because “repetition is the mother of learning.” In the gospel, Christ, too, taught his followers how to pray, not by saying, “pray what ever you like, and in your own words,” but by saying, “When you pray, say (these words), ‘Our Father, Who art in heaven.’” (Matthew 6:5). As we take this all to heart, we learn how to humble ourselves to the gestures, practices and disciplines that belong to the Church’s being and life. Because the little things we do are important. We respond to the prayers at the Holy Liturgy by saying “Amen,” not just once, but over and over. We make prostrations before the icon of Christ, not just once, over and over. We receive the holy sacrament from the cup of the Lord, not just once, but over and over. We do so because all of these repeated things add up to inner cleansing, healing, and perfection.

Are we anymore ritualistic than the rest of the human race? I don’t think so. Its just that the rites we practice have a far more nobler purpose. 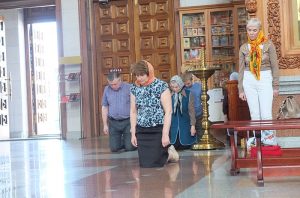 Obedience and Faith – A lesson from the Centurion

“Truly, I say unto you, that not even in Israel have I found such faith.” Christ spoke these…

A Word of Warning, A Word of Hope. On the Parable of the Sower

n the Orthodox East, to reiterate, morality was therefore never seen simply as a “code of behavior” that…