Source: Catholic News Agency
Elise Harris | 24 July 2014
Vatican City, Jul 24, 2014 / 06:44 am (CNA/EWTN News).- A Sudanese woman spared of a death sentence for refusing to renounce her Christian faith arrived in Rome with her family Thursday, where they met with Pope Francis a few hours after landing. 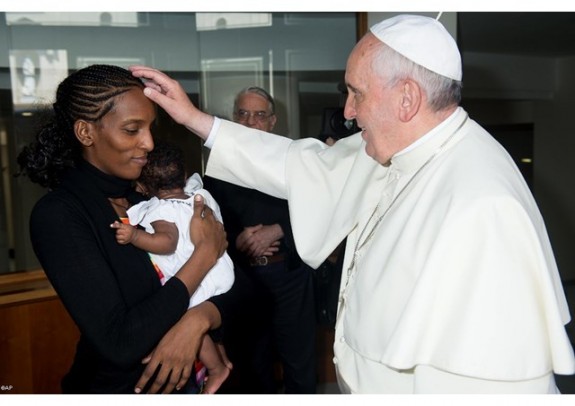 “Pope Francis was very tender with her, her husband, who was in prison, and thanked her for her courageous witness to perseverance in the Faith,” Vatican spokesman Fr. Federico Lombardi said of the encounter in a July 24 statement.

Describing the meeting between the young family and the Roman Pontiff as “very serene and affectionate,” Fr. Lombardi explained that for him encounter was “a gesture of closeness and solidarity for those who suffer for their faith.”

According to Vatican Radio, Ibrahim and her husband Daniel Wani, a U.S. citizen, as well as their two children, 1-year-old Martin and 2-month-old Maya, who was born in prison, met the Roman Pontiff in the Vatican’s Saint Martha guesthouse at 1:00 p.m. local time.

Italian Prime Minister Matteo Renzi also welcomed the family at the airport, calling it “a day of celebration.”

In May, the 27-year-old woman was charged with abandoning Islam under Sudanese law. Because her father was a Muslim, Ibrahim was legally considered a Muslim even though her mother raised her as a Christian after her father left the family when she was 6 years old.

Despite pressure and multiple death threats, Ibrahim refused to renounce her Christian faith while in prison.

In addition to the crime of apostasy – or the abandoning of the Islamic faith – Ibrahim was also charged with adultery. Her marriage to her Christian husband was not considered valid since she was considered a Muslim.

She was to receive 100 lashes for the adultery charge and was sentenced to death by hanging for apostasy.

After having her death sentence revoked by a Sudanese court June 23 due to international pressure, Ibrahim was re-arrested along with her husband at the Khartoum airport the next day on charges of forged documents. The entire family was detained for two days, until the new charges were dismissed.

Italian news agency Corriere della Sera reported that the family has remained in the Italian embassy of the Sudanese capitol, Khartoum, since June 26 until leaving the country on a flight that landed in Rome this morning at roughly 9:30 local time.

On board the flight along with the family was Italy’s vice minister of Foreign Affairs Lapo Pistelli, who has been following Ibrahim’s case. According to the agency, Pistelli had already met Ibrahim in Khartoum July 3.

The family is set to remain in Rome for a few days, after which they will depart for New York.

Millions of children have either been killed, displaced or orphaned as a result of Syria’s ongoing, bloody civil…