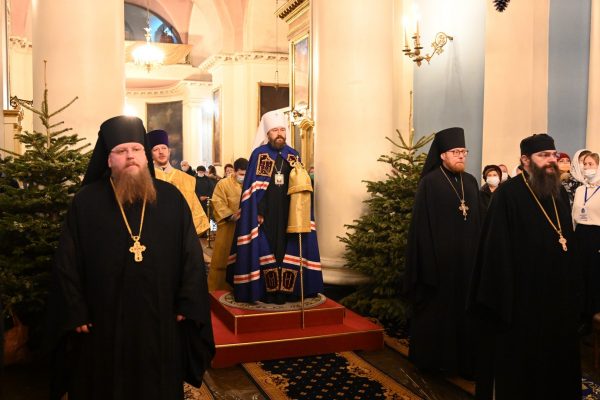 January the 14th, 2022, the Feast of the Circumcision of the Lord and the commemoration day of St. Basil the Great, marked the 20th anniversary of the episcopal consecration of Metropolitan Hilarion of Volokolamsk.

The Chairman of the Department for External Church Relations of the Moscow Patriarchate presided over the festive Divine Liturgy at the church of the Icon of the Mother of God ‘the Joy to All Who Sorrow’ in Moscow.

During the Prayer of Fervent Supplication, prayerful petitions were offered for the deliverance from the coronavirus infection.

After the Divine Liturgy, Metropolitan Dionisy of Voskresensk read out a congratulatory message from His Holiness Patriarch Kirill of Moscow and All Russia on the occasion of the 20th anniversary of Metropolitan Hilarion’s episcopal consecration.

Then Metropolitan Niphon of Philipoppolis extended congratulations to His Eminence Hilarion on behalf of the representatives of Local Orthodox Church to the Patriarchal See of Moscow. He noted in particular, “In your youth you were given the gift of faith in God. Through the subsequent years, you have lived up to this faith, developing it and bearing in yourself the flame of love for neighbours. In ascending the stairs of the service of the Holy Church and accumulating knowledge and experience in carrying out various tasks, you have discovered how rich the Lord is in His mercy to us in His great love wherewith He loved us (Eph. 2:4).

“In defiance of existential trials, you with God’s help continue your life journey without losing self-confidence, sincerely serving the Russian Orthodox Church and preaching the word of God. Attending and chairing various church and interreligious conferences and forums, you are guided by the words of the Psalmist, Not unto us, O LORD, not unto us, but unto thy name give glory (Ps. 113:9)”.

Metropolitan Niphon wished His Eminence Hilarion God’s help in his service for the good of the Russian Orthodox Church. “May the joy that you give to the Church fill your heart”, he stressed.

Congratulations were extended to His Eminence by representatives of the youth club ’Voskhozhdenie’ (Ascent) functioning at the Church of the Joy to All Who Sorrow Icon of the Mother of God in Bolshaya-Ordynka.

Then Metropolitan Hilarion addressed the congregation with a homily:

I congratulate all of you on the feast of the Circumcision of the Lord and the commemoration day of St. Basil the Great, Archbishop of Caesarea in Cappadocia, whose Divine Liturgy we celebrated today.

On this day when I recall the 20th anniversary of my episcopal consecration, I feel cordially grateful in the first place certainly to His Holiness Patriarch Kirill of Moscow and All Russia. Twenty years ago, as the Metropolitan of Smolensk and Kaliningrad and chairman of the Department for External Church Relations of the Moscow Patriarchate, he was the initiator of that consecration. He introduced me to His Holiness Patriarch Alexy II as a candidate for episcopal ministry and thanks to his support in the years after I carried out the episcopal ministry in the places assigned to me by the Supreme Authority.

When Metropolitan Kirill of Smolensk and Kaliningrad was elected to the Patriarchal See of Moscow, by his decision and that of the Holy Synod the honour and responsibility fell on me to become the head of the Department for External Church Relations of the Moscow Patriarchate, one of the oldest synodal departments of the Russian Orthodox Church responsible for inter-Orthodox and inter-Christian contacts and interreligious dialogue and support for our compatriots in the diaspora, contacts with political structures in foreign countries and with international organizations.

It is a very large volume of work requiring daily efforts, daily exertion, monitoring all that happens in the world, as well as certain diplomatic skills. Above all that, this work requires absolute devotion to one’s Church, without which neither I, nor the whole team of the Department for External Church Relation could manage to cope with our tasks.

Moreover, ever new and new tasks emerge. In the inter-Orthodox relations, we have entered a time difficult for us all. We have encountered not just misunderstanding but the actions of the Patriarch of Constantinople hostile towards our Church as, instead of helping us to overcome the schism existing in Ukraine, he has done everything possible to deepen it and to lead to a deadlock the negotiations on healing the schism, which was going on quite successfully and was likely to lead to some decisions acceptable for all.

Regrettably, Patriarch Bartholomew have made decisions that have broken down the body of the world Orthodox community not only in Ukraine but also in the whole world.

We are taking the developments with humbleness, as God’s dispensation, as a trial sent to us. Throughout her history, the Church endured many trials. Our Russian Orthodox Church experienced such trials that God’s miracle alone could explain her survival in the grave situation when there was an aim to eradicate the Church physically by the way of eliminating the clergy, closing all the monasteries and destroying churches.

All the powers of hell were raised to destroy the Church. However, she has survived. For some time, she survived as a small flock, as a group of persecuted people. Later on, it pleased God to raise our Church as the Phoenix from the ashes. And today we can see how the Church is reviving and strengthening and no efforts to undermine it can bring fruits.

Let us reflect on a very simple fact. Considerable forces have been mobilized to split our Church. However, the Church has not split up and remains united. Considerable political and financial means were invested to weaken our Church. However, the Church has not weakened and preserved her unity in Russia, in Ukraine, in Byelorussia, in Moldavia, in Kazakhstan and other countries wh ere she is present. This unity is ensured above all by the unity of the episcopate, clergy and the faithful. Nobody in our Church wants to move away to anywhere. Everyone wants to be together in one large multinational family, which was not created by our efforts and therefore is not to be destroyed or divided by us. We have received her such as she exists in the canonical boundaries in which she has shaped. And no one has the right to encroach on these boundaries.

We have exerted every effort to defend the sacred boundaries of our Church. This is what the Department for External Church Relations exists for – to help His Holiness the Patriarch, the Holy Synod and all the episcopate of the Russian Church to defend our sacred boundaries. It is what we will do with God’s help in the future.

I would like to express cordial gratitude to you, Your Eminence, dear Metropolitan Dionisy for the good co-work, which has been developed between the Department for External Church Relations and the Chancellery of the Moscow Patriarchate. Without this cooperation it would be very difficult for us to solve problems and resolve issues arising daily and requiring a thoughtful and calm discussion. And we find this calm and understanding in your person, for which I cordially thank you.

I would like to express cordial gratitude to you, Your Eminence, dear Metropolitan Niphon for the exclusive role you have played in the church life of the city of Moscow, and, certainly, in the inter-Orthodox relations. You represent not only the old holy Church of Antioch, which was founded by Ss Peter and Paul, but, in some sense, the entire world Orthodoxy, because you are rightly called, as they say in the diplomatic practice, the doyen of the corps of the representatives of Local Orthodox Churches in the city of Moscow. I cordially greet you and the representatives of Local Orthodox Churches, who are present here, and, in the language of St. Basil the Great, ‘those who are absent with good cause’ – those who are not present but who have sent their congratulations.

I cordially thank fellow-archpastors who took part in today’s liturgy – the Patriarchal Exarch for Western Europe and the newly appointed Exarch for Africa.

I thank His Eminence Metropolitan Zinovy.

Today, we have gathered in a small circle to prevent a violation of the epidemic rules, but a great many hierarchs, who wished to take part in our festivities today, are with us in their prayers.

I would like to thank my vice-chairmen in the Department for External Church Relations and all the staff members of the Department, as well as all those who work together with me in the Institute of Post-Grade Studies in the field of theological education. I also thank the clergy of this holy church, the youth who are present here and who greeted me today in warm and sincere words.

I would like to wish us all that the Lord may give us good health, that we and our friends may not be affected by this virus, which unfortunately continues ranging throughout the world.

May the Lord protect us from every evil. May the Most Holy Mother of God cover us with Her honourable omophorion, and may the intercession of St. Basil the Great, whose memory we solemnly celebrated today, accompany us in our life journey.

I congratulate you all on the feast! May the Lord preserve you!”