Metropolitan Hilarion: Every human being has an opportunity to follow Christ

Source: DECR
Metropolitan Hilarion (Alfeyev) | 25 August 2015
On 23 August 2015, 12th Sunday after Pentecost, commemoration day of St Sabbas of Storozhi, Metropolitan Hilarion of Volokolamsk, chairman of the Department for External Church Relations of the Moscow Patriarchate, celebrated the Divine Liturgy at the Church of the “Joy to All the Afflicted” Icon of the Mother of God in Bolshaya Ordynka Street, Moscow. 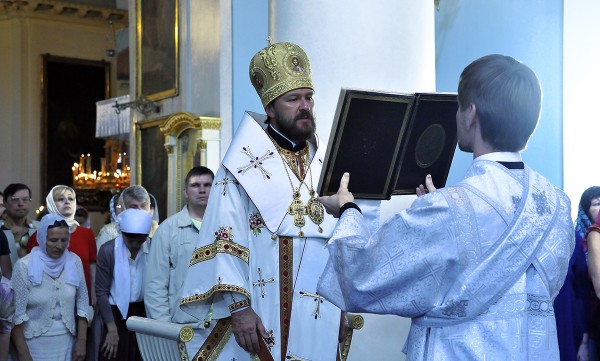 Concelebrating with the archpastor were Archimandrite Andrei (Krekhov), father superior of the Monastery of the Holy Trinity in the city of Ryazan; Archpriest Chad Hatfield, Chancellor of St Vladimir’s Orthodox Theological Seminary in New York (Orthodox Church in America); and clergymen of the church.

A delegation of the Anglican Church in North America, led by its primate, Archbishop Dr. Foley Beach, attended the service.

After the Liturgy, Metropolitan Hilarion delivered an archpastoral homily, saying in particular:

“This Sunday, when we are still celebrating the Feast of the Transfiguration of Our Lord and Saviour Jesus Christ, we have heard a lesson from the Gospel according to Matthew about a young man who came to the Lord and asked Him what he had to do to inherit the Heavenly Kingdom (Cf. Mt. 19:16).

“Answering to the young man, the Lord Jesus Christ cited those commandments from the Law of Moses that deal with relationships between people. The young man said in response, “All these things have I kept from my youth up: what lack I yet?” The Lord said to him, “If thou wilt be perfect, go and sell that thou hast, and give to the poor, and… come and follow me” (Mt. 19:20-22).

“Of course, Christ felt that the young man was rich and that for him to sell his property and give the money to the poor meant to leave everything in order to follow Him. We know that the Lord did not call everyone He met to follow Him. When Christ was walking by the sea of Galilee and saw fishers there, He chose four of them, saying, “Follow me, and I will make you fishers of men” (Mt. 4:19). When someone He had called said, “Suffer me first to go and bury my father,” He replied to him, “Let the dead bury their dead” (Mt. 8:21-22).

“The rest of people hear Christ’s another words. Firstly, He calls upon them to fulfill the commandments which had been the foundation of human society for centuries. Secondly, He says that salvation, impossible for men to attain on their own, is possible with God. Therefore, if the man is not ready to give all his possessions to the poor in order to follow Christ it does not mean that the doors to the Heavenly Kingdom are closed for him.

“The Lord does not demand that all people should give up everything they have. He expects each of us to regard Him and His commandments as the cornerstone of our life and to use what we have for our own benefit and for the benefit of our neighbours. It relates not only to material things. Some people receive from the Lord wealth, others, intellect, still others, compassionate and merciful heart. Every man has something to share with his neighbours. After all, every human being has an opportunity to follow Christ.

“Let us live according to the commandments of Our Lord Jesus Christ. Let us learn lessons from the Gospel readings we hear every Sunday. And when we cannot go to church, let us at home read the pericope intended for a particular day of the liturgical year. Thus we will be able to read the whole Gospel at least once a year and take in all the wisdom, strength and grace which are poured out to us from the divinely-inspired pages written by the Apostles through whom Our Lord Jesus Christ Himself speaks to us. Amen.”

Metropolitan Hilarion also greeted the members of the delegation of the Anglican Church in North America, led by Archbishop Foley Beach, and Archpriest Chad Hatfield (Orthodox Church in America) who was accompanying the delegation. The DECR chairman said, in particular, “Our guests represent a conservative wing of the Church of England, which does not accept the novelties made manifest, to our regret, in the Anglican Communion and Protestant communities.” Metropolitan Hilarion mentioned that during his visit to the United States he had been to Nashotah House Theological Seminary, WI, the stronghold of traditional Anglicanism. On 26 October 2012, Metropolitan Hilarion of Volokolamsk was honoured the degree of doctor honoris causa at the Nashotah House Seminary.