On 3 March 2013, the Sunday of the Prodigal Son, Metropolitan Hilarion of Volokolamsk, chairman of the Moscow Patriarchate’s Department for External Church Relations, celebrated the Divine Liturgy at the Church of the “Joy to All the Afflicted” Icon of the Mother of God in Bolshaya Ordynka street in Moscow. Concelebrating with Metropolitan Hilarion were archpriest Dimitry Sizonenko, DECR secretary for inter-Christian relations; ordained staff members of the Department for External Church Relations; and clerics of the Church.

Singing at the service was the Moscow Synodal Choir conducted by the honoured artist of Russia, Mr. Alexei Puzakov. 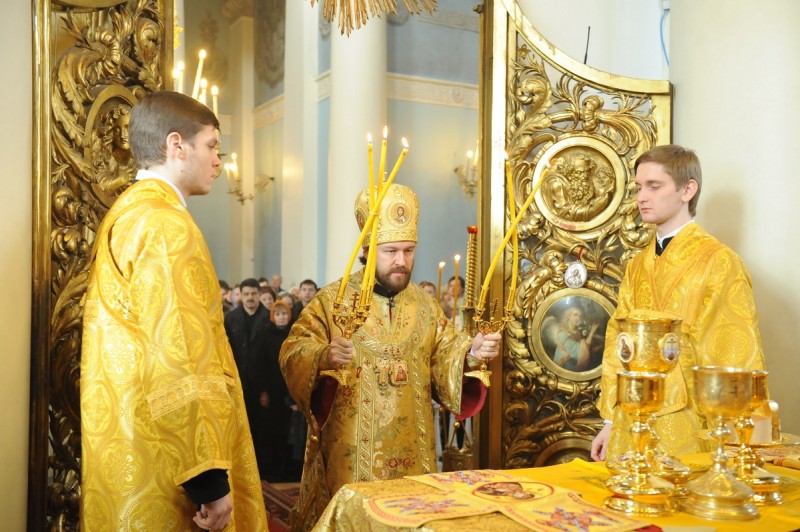 After the Liturgy, Metropolitan Hilarion addressed the worshippers with his archpastoral homily, saying in particular, “Today, with Lent starting in two weeks, in the Gospel reading we have heard the Lord’s Parable about the Prodigal Son.

“Showing an example of repentance, this story refers to the life of each of us: having received something from God, a man wasted his substance with riotous living (Luke 15:13). And we all have something of that kind to recall, something to repent of, something to ask God’s forgiveness for.

“It is not only the younger son that this parable tells us about, but also the elder one. The elder son was the main heir of his father’s property when the younger son unexpectedly returned. He returned as a repentant, he realized that he had wasted his substance quickly and recklessly and would not get another chance to inherit: his father is alive and when he dies the elder son will inherit everything. He does not even dare to think that his father will receive him as a son, but hopes to become one of his hired servants who make their bread by work. But the father receives him with arms open and restores him to filial dignity.

“The elder son, the heir, who all that time lived with the father, waiting for him to die in order to inherit everything, saw a rival in his younger brother: ‘what if the father once again decides to hand him down the inheritance?’ The elder son refuses to meet with the brother and call him a brother; he reproaches his father for treating the younger son with love while not paying enough attention to the firstborn.

“What we see is a human conflict. Such conflicts are common in families, between parents and children, between elder and younger brothers. Inheritance disputes sometimes turn into suits and even lead to crimes because often a man finds it more important to receive an inheritance, gain some material welfare than to love his father, his brother, and to maintain good relations with his family.

“But this is what relates to a level of human relations. But there is one more level, that is the level of relations between man and God. But people differ in their attitude to these relations. Some people think that they can lend something to God and borrow something in return, that they can please God and claim a reward from Him. There are such faithful, religious people, who, just like the elder son from the Parable, believe that they have done their duty and can expect a well-deserved reward in earthly life. If, for some reasons, they do not receive it, they start grumbling at God. Comparing their life with that of other people, they say, ‘Why does God help that man who lives a prodigal, dissolute life and does not help me while I live a righteous life, follow the commandments, and pay a tithe?’

“But relations between man and God are based on another principles. These are the relations between the loving Father and His sons. The Lord loves everybody: He loves those who have always been near Him and tried to fulfill His commandments and live piously. But He also loves those of His children who did not follow the commandments and fell into sin, who took their journey into a far country and there wasted their substance.

“This truth was concealed from the Old Testament people, but it was revealed by our Lord Jesus Christ who showed us that God does not treat people according to justice, because His mercy exceeds His own justice. The Lord forgives people their sins; and this is what the Church’s faith in the power of the Sacrament of Penance and the power of repentance is based upon.

“Again and again, we go to confession with the same sins. Although confession gives us a chance to expiate our sins, it often happens that we cannot get rid of them. We know that we sin, but fall into sin again and again. We realize that we have wasted our substance in a far country, and with such feelings we come to God. And if our repentance is sincere and comes from the bottom of our heart, God receives us and again and again gives us an opportunity to get back our filial dignity and dwell in the Father’s house.

“The Church reminds us of this Parable so that we could prepare ourselves for Lent, so that each of us, facing God’ love and mercy, would ask ourselves: what substance given to me I managed to preserve and multiply, and what I wasted in a far country. This parable invites us to revise our life and to show, like the younger son did, repentance for our sins in order to receive another chance to embark on the path of salvation. Amen.”