Metropolitan Hilarion: The Lord Calls All of Us to Apostolic Service

Source: DECR
Metropolitan Hilarion (Alfeyev) | 31 December 2014
On 28 December 2014, the 29th Sunday after Pentecost, of the Holy Forefathers, Metropolitan Hilarion of Volokolamsk, chairman of the Moscow Patriarchate’s Department for External Church Relations, celebrated the Divine Liturgy at the Church of the “Joy of All Who Sorrow” Icon of the Mother of God in Bolshaya Ordynka Street in Moscow. 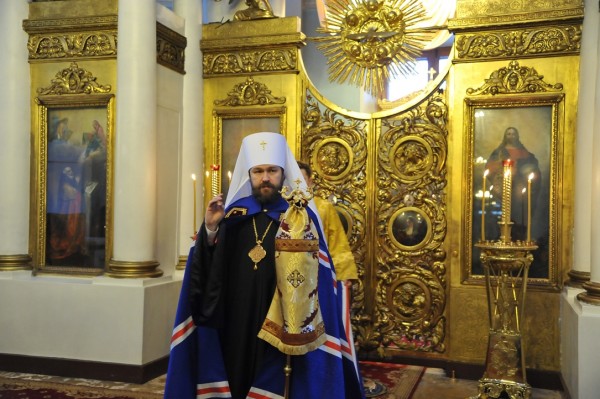 Concelebrating with the archpastor were hieromonk Ioann (Kopeikin), pro-rector of Ss Cyril and Methodius Theological Institute for Post-Graduate Studies, and clerics of the church.

After the Litany of Fervent Supplication Metropolitan Hilarion said a prayer for peace in Ukraine.

After the Liturgy, the archpastor addressed the worshippers with a homily, saying in particular:

“In the name of the Father, of the Son, and of the Holy Spirit!

“In today’s Gospel reading we have heard the parable of Our Lord Jesus Christ about those bidden for supper. The master of the house invited the guests, but they began to make excuse. Then the master of the house said to his servant, “Go out quickly into the streets and lanes of the city, and bring in hither the poor, and the maimed, and the halt, and the blind… that my house may be filled” (Lk 14:21-23). The servant did what his master had commanded him to do.

“This parable tells us about the people of Israel, to whom the Lord Jesus Christ came to herald the Kingdom of God. For, when a woman of Canaan pleaded with the Son of God to heal her daughter, “He answered her not a word” (Mt 15:23). And when His disciples came and besought Him to send her away, He said, “I am not sent but unto the lost sheep of the house of Israel” (Cf. Mt 15:23-24). However, leaders of God’s chosen Jewish people – high priests, scribes and Pharisees – repudiated Christ and thus refused to accept the Divine invitation to the Kingdom of God. The Son of God Who was sent to the people of Israel, was not accepted by the majority of people.

“Then the Lord began to say that His preaching would also affect other peoples, including the Gentiles. And after His resurrection the apostles had a whole discussion in regard to where to preach Christ: among the Jewish people or among the Gentiles. St Paul finalized the conception that Jesus Christ must be preached not only to the circumcised, representatives of the people of Israel, but to the whole world. While ascending into heaven, Christ said to his disciples, “Go ye therefore, and teach all nations, baptizing them in the name of the Father, and of the Son, and of the Holy Spirit” (Mt 28:19).

“The Gospel parable about those bidden for supper is undoubtedly addressed to us as well. In the historical perspective, the people of Israel did not accept Christ. The Old Israel has been replaced by the New Israel, with us being its part. The Lord calls each of us for His wedding feast; yet, not everyone responds to the message. Every time the Divine Liturgy is being celebrated in a church, the doors to the Divine wedding feast stand open for us, and not a servant, but the Lord Himself calls us for His supper, saying, “Take, eat; this is my body” (Mt 26:26). It is to us as well that His words, which the apostles first heard during the Last Supper, are addressed, “Drink ye all of it;  For this is my blood of the new testament, which is shed for many for the remission of sins” (Mt 26:27-28).

“Every time we hear a priest saying the words “with the fear of God and faith draw near,” when the Holy Chalice is being brought out of the sanctuary, – it is an invitation addressed not only to us, present here, but to all those who wish it. Neither invitation cards nor payment are needed. What is needed is the desire to come and unite with the Lord.

“The wedding feast, for which the master bids his guests, is the Holy Eucharist; and the house where the supper is to take place is the church of God. The older generation of our parishioners remembers the time when there were few churches, when there were no churches at all in large cities; and if there was a church, it was a small one far away. Nowadays the road to church is open for everyone. Today the word of God can be heard everywhere: not only from church ambo, but also through the mass media, television, and the Internet. The apostolic preaching which began two thousand years ago continues today, and our task is to respond to the calling of the Lord Jesus Christ, addressed to each of us.

“Our task is also to invite other people to the Divine Supper. Each of us is called to be the servant whom the master sent into the “streets and lanes” in order to bid all people for the feast. God calls all of us, priests and laypeople, men and women, to the apostolic service.

“The House of the Lord will never become empty; it will always be full of people who come to the Church regardless of circumstances or of how secular authorities treat her… The Lord invites all of His sons and daughters, all Orthodox Christians. We should pray to God for our relatives and friends to be the partakers of the Divine Supper, for the Lord has called us to enter the Church so that we, having partaken of His grace, would make our neighbours its partakers as well. Amen.”