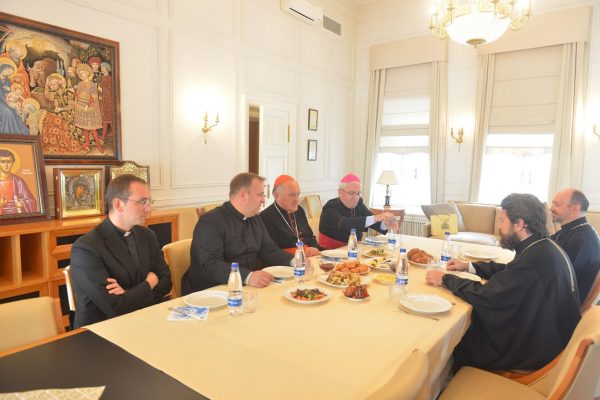 On September 11, 2019, Metropolitan Hilarion of Volokolamsk, head of the Moscow Patriarchate department for external church relations (DECR) and rector of the Ss Cyril and Methodius Institute of Post-Graduate Studies (CMI), met at the CMI with Cardinal Kazimierz Nycz, Archbishop of Warsaw, who is in Moscow on an unofficial visit.

Metropolitan Hilarion warmly welcomed the high guest, who came to Moscow for the second time. His Eminence noted the great importance of the visit made by His Holiness Patriarch Kirill of Moscow and All Russia in August 2012 to Poland, during which he and the president of the Polish Episcopal Conference, Archbishop Józef Michalik of Przemyśl, signed a Joint Message to the Peoples of Russia and Poland on Reconciliation.

During the talk, which was held in a spirit of mutual understanding and benevolence, the sides dealt with issues of church-state relations in Russia and Poland, in particular, the problem of teaching religion in comprehensive schools. Cardinal Nycz pointed out that, despite the secular nature of the secondary education in Poland, priests of both the Roman Catholic Church and the Polish Orthodox Churches have the right to conduct catechetical lessons in schools. Metropolitan Hilarion stated that in Russia, representatives of the Russian Orthodox Church have been deprived of such an opportunity for over 100 years now, which has a negative effect on the spiritual and moral formation of the youth.

With satisfaction the both sides noted the high level of the bilateral relations between the Moscow Patriarchate and the Roman Catholic Church, a vivid testimony to which was the historic meeting between Pope Francis and Patriarch Kirill on February 12, 2016, in Havana, and the bringing of the relics of St. Nicholas the Wonderworker from Bari to Russia in May-July 2017.

In conclusion of the talk, the metropolitan and the cardinal exchanged tokens of the meeting.