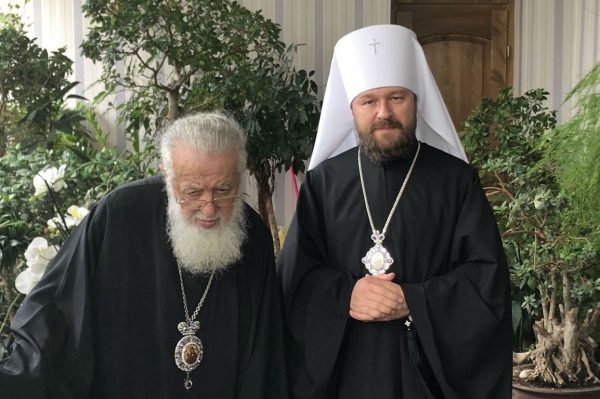 On 4 June 2018, Metropolitan Hilarion of Volokolamsk, chairman of the Moscow Patriarchate’s Department for External Church Relations (DECR) paid a visit to Georgia with the blessing of His Holiness Patriarch Kirill of Moscow and All Russia.

Metropolitan Hilarion was received at the Patriarchal residence in Tbilisi by His Holiness and Beatitude Ilia II, Catholicos-Patriarch of All Georgia. Among those taking part in the meeting were hierarchs of the Georgian Orthodox Church: Patriarchal Locum Tenens Metropolitan Shio of Senaki and Chkhorotskhu, Metropolitan Theodore of Akhaltsikhe and Tao-Klarjeti, and Bishop Vakhtang of Nikortsminda; Archpriest Igor Yakimchuk, DECR secretary for Inter-Orthodox relations, and Mr. Alexander Yershov, assistant to the DECR chairman.

Attending the meeting was Archpriest Vladimir Aleksandrov assigned by the Holy Synod of the Russian Orthodox Church (resolution of 14 May 2018) to Tbilisi for taking spiritual care for the Russian-speaking faithful. Metropolitan Hilarion officially introduced him to the Primate of the Georgian Orthodox Church.

Discussed during the long talk were the development of cooperation between the two Local Orthodox Churches and the problems of inter-Orthodox relations.

During his stay in Tbilisi Metropolitan Hilarion visited the Monastery of St. David and the Sioni Cathedral of the Assumption of the Mother of God and venerated the holy sites of the Georgian Orthodox Church.

That same day the DECR chairman returned to Moscow. Among those seeing him off at the airport were Metropolitan Theodore, Bishop Vakhtang, and Archpriest Vladimir Aleksandrov. 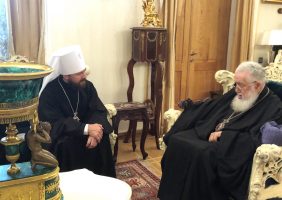