Metropolitan Hilarion of Volokolamsk speaks at the Conference on St. Augustine and World Culture 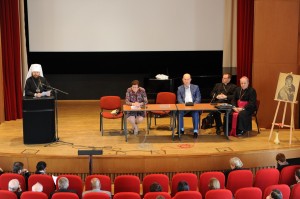 On 23 April 2013, a conference on St. Augustine and World Culture took place in the Grand Hall of the All-Russia State Library of Foreign Literature.

Participating in the Conference are Archbishop Nifon of Phillippopolis, representative of the Patriarch of the Antioch and All the East to the Patriarch of Moscow and All the East; Archbishop Ivan Jurkovič, Apostolic Nuncio to the Russian Federation; honorary Archbishop of Algeria Henri Teicie; Ambassador of the Italian Republic Antonio Zanardi Landi; Ambassador of the Republic of Cŏte d’Ivoire Bernard Tano-Boutchaoué; staff members of the Moscow Patriarchate’s Department for External Church Relations; faculty and students of the Theological Institute for Post-Graduate and Doctoral Studies; Russian and foreign scholars specializing in the legacy of St. Augustine; and students of secular higher education establishments.

Ms. Yekaterina Genieva, director general of the Library of Foreign Languages; Ambassador Smaïl Chergui of the People’s Democratic Republic of Algeria to the Russian Federation; and Archbishop Paolo Pezzi, the Ordinary of the Moscow Archdiocese of the Mother of God.

Metropolitan Hilarion, chairman of the Moscow Patriarchate’s Department for External Church Relations; chairman of the Synodal Biblical and Theological Commission and rector of the Ss Cyril and Methodius Theological Institute for Post-Graduate and Doctoral Studies presented a report entitled ‘St. Augustine at the turn of civilization, religions and cultures.’ Metropolitan Hilarion and guests of the conference took part in the opening of an exhibition of rare publications of St. Augustine from the Library holding.