Metropolitan Hilarion of Volokolamsk: We pray for the soonest return of hierarchs abducted in Syria

Metropolitan Hilarion of Volokolamsk, chairman of the Moscow Patriarchate’s Department for External Church Relations, made comments to the mass media concerning the abduction of hierarchs of the Patriarchate of Antioch and of the Syrian Orthodox Church: 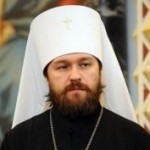 Yesterday evening we received the sad news that militants had kidnapped in Syria Metropolitan Boulos of Aleppo, brother of His Beatitude Patriarch John X of Great Antioch and All the East, and Metropolitan Mar Gregorios Yohanna Ibrahim of the Syrian Orthodox Church. What is known for the time being is that the hierarchs were abducted outside Aleppo while traveling together in the same car, and that the deacon who was driving the car was killed. We express our deep sympathy to Patriarch John X and to the Supreme Head of the Syrian Orthodox Church, Patriarch Mar Ignatius Zakka I Iwas. We urge world community to join efforts in order to find the abducted hierarchs as soon as possible so that they could return to the place where they carry out their ministry. We also call Syrian authorities to do their best for that. We appeal to human rights organizations to raise their voice in defense of the abducted hierarchs of the Patriarchate of Antioch and the Syrian Orthodox Church. We call Western governments, supporting extremists who are eager for power, to stop this support because what is going on in Syria is not a civil war but an armed attempt to overthrow current regime with the help of external force. We pray for peace to be re-established in the ancient land of Syria and for Christianity to keep developing there, regardless of future course of events and political situation. We pray for the health and soonest return of the abducted hierarchs, Metropolitan Boulos of Aleppo and Metropolitan Mar Gregorios Yohanna Ibrahim.