Metropolitan Hilarion Reads a Paper at a Conference in the Bose Monastery, Italy 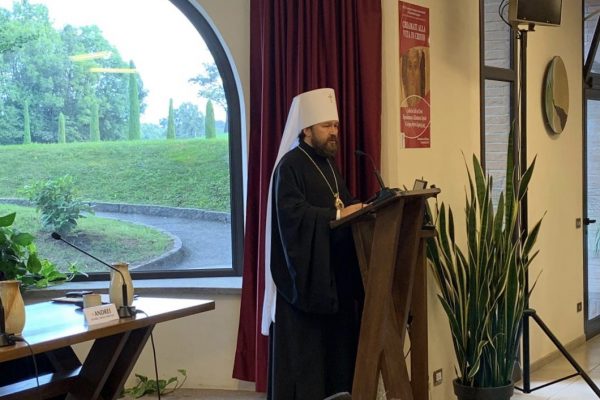 On September 5, 2019, Metropolitan Hilarion of Volokolamsk, head of the Moscow Patriarchate department for external church relations (DECR), with a blessing of Patriarch Kirill of Moscow and All Russia, took part as head of the Russian Orthodox Church delegation, in the 27th International Orthodox Spirituality Symposium on Called to Live in Christ held in the monastic community of Bose, Italy.

The conference is attended by high-ranking representatives of Local Orthodox Churches, the Roman Catholic Church and Protestant communities, among them Metropolitan Seraphim of Zimbabwe and Angola (Patriarchate of Alexandria), Metropolitan Porfirije of Zagreb and Ljubljana (Serbian Patriarchate); Metropolitan Andrew of Cluj (Romanian Patriarchate), Metropolitans Ioannis  and Nektarios (Church of Greece); Archbishop Piero Marini, President of the Pontifical Committee for International Eucharistic Congresses, Archbishop Antonio Mennini (the Holy See Secretariat of State); Coptic Bishop Angaelos of London; Bishops Jonathan Goodall and John Stroyan (Church of England), and many others.

Metropolitan Hilarion presented a paper on the importance of the personality and teaching of the Lord Jesus Christ for Modern Man.

His Eminence had talks with the founder of the Community of Bose, Father Enzo Bianchi and representatives of several Orthodox Churches in which they discussed inter-church cooperation.

On the same day, Metropolitan Hilarion visited the Monastery of the Holy Cross in Roveredo, Switzerland, in which he had a talk with its abbot, Schema-Archimandrite Gabriel (Bunge), and the brethren.