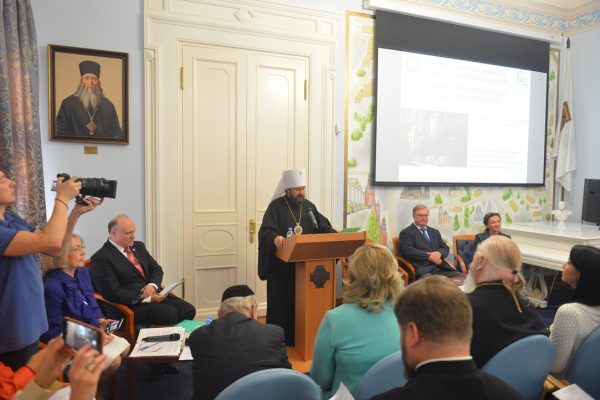 On 10th September 2019, a conference on “The Family and Family Values in Traditional Religions of Russia. Protection of Family in Religious and Public Dialogue” took place at the Centre of the Imperial Orthodox Palestine Society (IOPS) in Moscow. The conference was organized by the Interreligious Council of Russia (ICR) and the IOPS.

Opening the meeting, Mr. Sergey Stepashin, IOPS chairman and head of the ICR Committee of Trustees, reminded all those present about the challenges facing the traditional family values in the modern-day society. “Today we are facing completely new threats, unknown before, with the very foundations of family and love being questioned. In this regard it will be interesting to hear how traditional religions of our country perceive and address this problem,” he said.

Among the keynote speakers of the conference was Metropolitan Hilarion of Volokolamsk, chairman of the Moscow Patriarchate’s Department for External Church Relations, member of the ICR Presidium. He delivered a presentation entitled “Activities of the Interreligious Council of Russia Aimed at Preserving and Supporting the Institution of Family and Protecting the Life of Unborn Children.”

Having described family as one the most stable and conservative social institutions, the archpastor also pointed out that in the present-day Western society the very notion of family and marriage is being subjected to revision under the pretext of promoting the values of freedom and human rights. “However, these values, rooted in religion, are being in this case distorted,” Metropolitan Hilarion said, “Freedom is being identified with all-permissiveness, and rights are being considered in isolation from the notion of true human dignity and the purpose of human life, which is associated with moral self-perfection and likening to the Creator.”

The DECR chairman continued: “Our conference is being held under the auspices of the Interreligious Council of Russia. In building up interfaith interaction we strive to put emphasis on the cooperation in the spheres of common interest. One of the spheres in which we find accord is the protection of family and children. This topic was repeatedly raised in the statements of the Interreligious Council of Russia, which reflect the consolidated position of our country’s religions – Orthodoxy, Islam, Judaism, and Buddhism – on the pressing problems of today’s society.”

On the instruction of His Holiness Patriarch Kirill, Metropolitan Hilarion presented Mr. Sergey Stepashin with the Medal in Commemoration of the Centenary of the Restoration of the Patriarchate in the Russian Orthodox Church. “Sergey Vadimovich makes considerable contribution to the work of the Interreligious Council of Russia as chairman of its Committee of Trustees. And the work of the Imperial Orthodox Palestine Society would be unthinkable without his personal efforts, personal involvement and personal inspiration,” the archpastor said, presenting the award to Mr. Stepashin.

Among those taking part in the conference were Bishop Serafim of Istra, chairman of the Moscow Patriarchate’s Synodal Department for Youth Affairs; Archpriest Dimitry Smirnov, chairman of the Patriarchal Commission for the Family and Protection of Motherhood and Childhood; Archpriest Lev Semenov, head of the Religious Education Centre of St. Tikhon’s Orthodox University of the Humanities; Mr. S.V. Melnik, staff member of the DECR Secretariat for Interreligious Relations and of the ICR Secretariat; Mr. Sh.A. Pshikhachev, president of the International Islamic Mission, plenipotentiary representative of the Coordinating Centre of the Muslims of North Caucasus in Moscow; Mufti Albir Krganov, chairman of the Spiritual Assembly of Muslims of Russia, member of the Civic Chamber of the Russian Federation; Rabbi Zinovy Kogan, vice-president of the Congress of Jewish Religious Organizations and Associations of Russia; Rabbi Yonatan Feldman, head of the Education Department of the Federation of Jewish Communities of Russia; Did Hambo Lama Dashi-Nima, representative of the Buddhist Traditional Sangha of Russia; Ms. A.A. Sharapova, head of the Working Group of the Council for the Implementation of State Policy on Family and Childhood under the President of Russia; Ms. I.A. Yumasheva, deputy of the State Duma of the Russian Federation, member of the Committee for International Affairs; and Deacon Iliya Kashitsyn of the DECR Secretariat for Interreligious Relations.

The conference brought together heads and members of youth organizations and non-governmental associations, as well as the faculty and students of religious and secular higher education institutions, scholars and experts.