On 5 April 2013, an international academic conference on ‘Role of the Edict of Milan in the History of the European Civilization and Topical Issues of Church-State Relations Today’ was held at the Institute of Theology of the Belarusian State University. 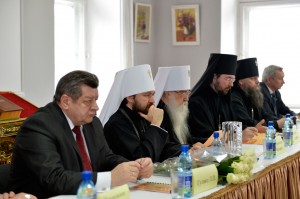 Metropolitan Hilarion of Volokolamsk, chairman of the Moscow Patriarchate’s Department for External Church Relations, rector of the Ss Cyril and Methodius Theological Institute for Post-Graduate and Doctoral Studies, chairman of the Synodal Biblical and Theological Commission, took part in the conference with the blessing of His Holiness Patriarch Kirill of Moscow and All Russia and at the invitation of Metropolitan Philaret of Minsk and Slutsk, Patriarchal Exarch for All Belarus.

The conference was preceded by an enlarged meeting of the Council of the Institute of Theology, chaired by His Eminence Metropolitan Philaret. Members of the Council unanimously resolved to honour Metropolitan Hilarion the degree of doctor honoris causa of the Institute of Theology of the Belarusian State University “for his outstanding contribution to theology and education and for strengthening inter-Christian and inter-Faith cooperation.”

The doctor honoris causa was greeted by Metropolitan Philaret of Minsk and Slutsk and by Mr. Sergei Ablameiko, rector of the University, who especially noted that the Belarusian State University had long known Metropolitan Hilarion as a gifted theologian and church historian, author of monographs dedicated to life and teaching of the Church Fathers and author of the works on dogmatics.”

The conference opened with the report of the DECR chairman who cordially thanked Metropolitan Philaret and the Council for the honour. Addressing Metropolitan Philaret, Metropolitan Hilarion said, “You became the head of the Minsk diocese thirty-five years ago and began your ministry in the most atheistic Republic of the Soviet Union. Now, thanks to your selfless work, Orthodoxy has revived in the Belarusian land and has become its strong spiritual and moral force.”

That same day, Metropolitan Philaret gave a banquet at the Diocesan Administration on the occasion of the DECR chairman’s visit. In the evening, five choirs and the State Academic Symphony Orchestra of the Republic of Belarus conducted by the People’s Artist of Belarus, Aleksander Anisimov, performed Metropolitan Hilarion’s composition ‘St Mathew Passion’ at the concert of religious music held at the State Concert Hall of the Republic of Belarus.