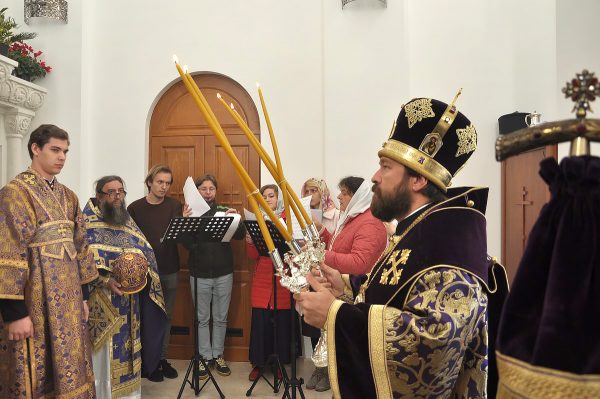 On 30 September 2018, 18th Sunday after Pentecost, afterfeast of the Elevation of the Cross, commemoration day of the Holy Martyrs Faith, Hope, Love and their Mother Sophia, Metropolitan Hilarion of Volokolamsk, chairman of the Moscow Patriarchate’s Department for External Church Relations, while in Austria upon the blessing of His Holiness Patriarch Kirill of Moscow and All Russia, and Archbishop Antony of Vienna and Budapest, head of the Moscow Patriarchate’s Administration for Institutions Abroad, consecrated the Church of Archangel Michael in the town of Laa an der Thaya in Austria. The church was built at the burial place of the Soviet soldiers who had died there during World War II.

After the Liturgy Archbishop Antony of Vienna and Budapest cordially greeted Metropolitan Hilarion who had laid the foundation of the Church of Archangel Michael while serving as the ruling hierarch of the diocese of Vienna and Austria.

Metropolitan Hilarion of Volokolamsk expressed his joy over an opportunity to visit Austria and take part in the consecration of the church, saying in particular:

“Today we have prayed for all those buried here, for our soldiers buried in this land. There are over 200 military graves in the Austrian land, and over 4 thousand in the neighbouring Germany. Hundreds of thousands of soldiers laid down their lives here so that we could have the peaceful skies above our heads. We believe that through their heroic deeds they gained the everlasting life, and pray for them as for heroes who laid down their lives for the sake of others, thus fulfilling the commandment of our Lord Jesus Christ.

“I am very glad that the church that was being built for 10 years has been consecrated today. I am recalling the day when the foundation of this church was laid and we were discussing its construction. When asked what church is to be taken as a model, I thought and said, ‘The Church of the Protecting Veil of the Most Holy Theotokos on the Nerl River.’ It is unlikely that many Austrian people have ever seen that church, but now they have an opportunity to see this gem of the Russian architecture. And our Orthodox faithful now can come here and lift up prayers for the living and for the dead and to commemorate all our soldiers who died during World War II.”