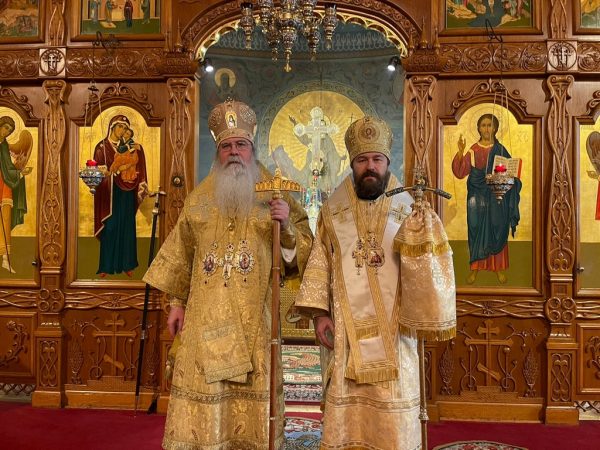 On November 14, 2021, Metropolitan Hilarion of Volokolamsk, Chairman of the Moscow Patriarchate’s Department for External Church Relations (DECR), continued his working visit to the USA and arrived in St. Tikhon’s Monastery in the Commonwealth of Pennsylvania at the invitation of His Beatitude Metropolitan Tikhon, Primate of the Orthodox Church in America.

After the Divine Liturgy, the Primate of the Orthodox Church in America greeted Metropolitan Hilarion most cordially and thanked him for the joy of common prayer in the oldest Orthodox Christian Monastery in America, which was founded in 1905 by St. Tikhon, the future Patriarch of Moscow.

His Beatitude asked the high guest to convey his fraternal greetings to His Holiness Patriarch Kirill of Moscow and All Russia and congratulations on his forthcoming remarkable jubilee.
In memory of Metropolitan Hilarion’s visit and common prayers His Beatitude Metropolitan Tikhon presented him with an icon with a particle of the holy relics of St. Nikolaj (Velemirović) of Žiča who fell asleep in the Lord at the monastery in 1956, and a shrine with the holy relics of Sts Tikhon of Zadonsk, Isaac of Syria and Hilarion the Great.

The DECR chairman greeted His Beatitude on behalf of His Holiness Patriarch Kirill and expressed his gratitude to the Primate of the Orthodox Church in America for the opportunity to visit the country, to take part in the academic theological conference held at St. Vladimir’s Orthodox Theological Seminary and for the invitation to visit St. Tikhon’s Monastery and St. Tikhon’s Orthodox Theological Seminary. Metropolitan Hilarion presented His Beatitude with a panagia and wished him the strengthening God’s aid and the intercession of the Most Holy Mother of God in the responsible and demanding ministry of the Primate of the Orthodox Church in America.

Archimandrite Sergius (Bowyer) told Metropolitan Hilarion about the history and present life of the monastery, its holy sites, museum’s collection, and its publishing house’s work.

After fraternal talk during repast, Metropolitan Hilarion visited St.Tikhon’s Orthodox Theological Seminary where Archpriest John Parker acquainted him with the history of the educational institution and its activities at present. Metropolitan Hilarion presented the seminary with his books on theology translated into English.