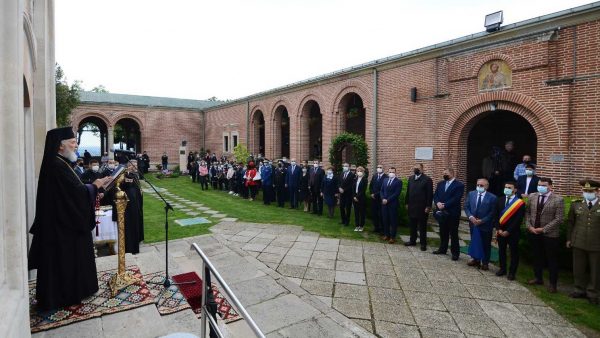 Prince Michael the Brave’s piety, the support he offered to Romanian Orthodoxy and the heroic deeds through which he protected European Christianity are reasons for his possible canonization, said Metropolitan Nifon after the commemoration service he officiated for the prince last Thursday, at 420 years from his martyrdom.

The service was held at Dealu Monastery, where the head of the great unifier is treasured. The hierarch recalled the deeds of this first unifier of Romanians, emphasizing that he managed to stave off the power of the Ottoman Empire and offer hope to all Christians in the East.

“His spiritual life, intense and endearing, full of piety, the heroism of his deeds of arms, his great contribution to supporting the pastoral mission of our Church, as well as to the defense of Christianity and Europe in dark times, justify the process of canonization for Voivode Michael the Brave,” Metropolitan Nifon said.

He explained how the prince substantially supported the mission of Romanian Orthodoxy:

“He consistently helped Romanians from Transylvania by conferring to Orthodox priests the same status the clerics of other confessions enjoyed. He reincluded the Transylvanian eparchy into the Metropolis of Târgoviște, as it was during Prince Mircea the Old’s reign, he appointed Romanian hierarchs for the dioceses of Muncaci and Vad, he brought Wallachian priests to the previously vacated Transylvanian parishes, he extended the authority of the Alba Iulia Metropolitan, founded numerous churches and monasteries, among which the metropolitan ensemble in Alba Iulia city, Prince Mihai Monastery in Bucharest, churches in the cities of Ocna Sibiului and Târgu Mureș, and the church of the Râmeți Monastery.”

Metropolitan Nifon also presented the volumes dedicated to the prince by the publishing house of Târgovişte Archdiocese and offered copies to the “Michael the Brave” School in Târgoviște.

The first political union of Romanians was done on May 27, 1600, under the reign of Michael the Brave. Fighting to eliminate Ottoman domination over his principality, he realized that he could achieve that only by unifying the three Romanian principalities into a more powerful state.

Prof. Ioan Aurel Pop, President of the Romanian Academy, declared in 2018 that the prince was seen in the diplomatic circles as a protector of Constantinople and implicitly of all Christianity against the expansion of the Ottoman Turks’ empire.

Dealu Monastery, near Târgoviște, in southern Romania, was founded by Prince Radu the Great. This year it celebrates 520 years of existence. Between 2000 and 2008, it was restored at the initiative and under the coordination of Metropolitan Nifon.