His Beatitude Metropolitan Onuphry was concelebrated by hierarchs of the Ukrainian Orthodox Church and a representative of the Serbian Patriarchate.
Pravmir.com team | 16 March 2020 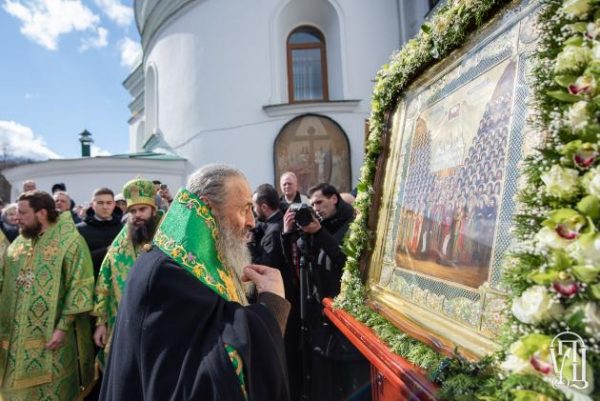 His Beatitude Metropolitan Onuphry of Kiev and All Ukraine presided over celebrations dedicated to the Synaxis of all the Venerable Fathers of Kiev Pechersk Lavra on March 15, 2020, second Sunday of Great Lent. A festive Divine Liturgy was held at the Dormition Cathedral of the Holy Dormition Kiev-Pechersk Lavra, reports the Information and Education Department of the Ukrainian Orthodox Church.

In his sermon, the metropolitan spoke about the feat of the Pechersk ascetics and its significance for the whole world.

“The Venerable Fathers of Kiev Pechersk show us that being with God is life, and being without God is death. When a person lives with God, he becomes useful for everyone, including himself and all people in general, both those who are closer and those who are further away from him. Saints do not need anything, but give everything they have to God and people. They pray for us, pray for the grace of God for us, even if we do not deserve this grace. For the sake of such people, the world exists,” said His Beatitude Metropolitan Onuphry.

During the service, fervent prayers were offered for peace in Ukraine and the unity of the Orthodox Church, and also a special prayer was said for the deliverance from the new virus that is spreading around the world.

After the Liturgy, the participants of the service formed a cross procession to the Near Caves carrying the icon of the feast. The celebrations ended with a prayer service to the Venerable Fathers of Kiev Pechersk Lavra, after which the faithful were covered with a sprinkling of holy water.