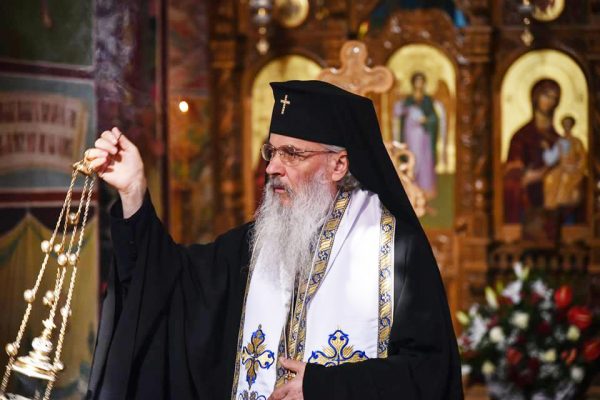 Photo credit: The “Nativity of Our Lord” Romanian Orthodox Church in München

His Eminence Serafim, Romanian Orthodox Metropolitan of Germany, visited last weekend the Lord’s Resurrection Parish in Mannheim. He listened to people’s confessions, baptized three children, celebrated the Divine Liturgy, and ordained a deacon to the priesthood. He spoke to the faithful about prayer, honest confession of sins and forgiveness, and also about the “evil spirits who distort judgment” and make us spiritually ill.

In his Sunday homily, the hierarch emphasized our need to renew perspective in our relationship with God: we should stop asking things from Him and start letting ourselves in His hands, as He knows best what we need.

“Our fight is not with flesh and blood, as the Holy Apostle Paul said, but with the evil spirits who distort our judgment and lead us astray from God’s path”, the Metropolitan said. “Each sin is rooted in an evil thought coming from the devil and if we do not refuse the thought immediately, it will take hold of us.”

“The world is laying ill under the power of the evil one. Today’s diseases are consequences of spiritual disease: lack of faith, love of money, fornication, the crime of abortion and contraception, the latter being also abortive”, the hierarch said.

His Eminence Serafim said that refusing to give birth to children is in disobedience with God’s commandment given to man in the Garden of Eden: “Be fruitful, and multiply, and replenish the earth, and subdue it“ (Genesis 1:28). Unlike the followers of other Abrahamic religions, Christians don’t obey this commandment anymore.

The world belongs to those who conquer it by giving birth to children, added the Romanian hierarch, while “the Christian population is dwindling by the day and nobody can foresee a bright future for the Christian world. Only a radical return to God through temperance and repentance could save us, just as it saved the inhabitants of the ancient city of Nineveh”.

During the Divine Liturgy, the metropolitan ordained to priesthood Deacon Constantin Prihoancă, who will serve at the new Parish of “Holy Trinity, Archangel Raphael and St Pirmin, Patron of Pfalz” in Ludwigshafen am Rhein. Father Constantin Prihoancă is a Doctor in Theology and a consultant of the Ecumenical Institute in Heidelberg.

The Lord’s Resurrection Parish from Mannheim, Germany, the oldest Romanian Orthodox parish in the Rhein-Neckar region, is guided by Parish Priest Cristian Podașcă.