Metropolitan Tikhon: A concrete way to respond to the violence is to establish peace in our own families and communities

Source: OCA
If we are truly concerned about the strife in the world today, let us begin by overcoming anger in our own hearts by striving for meekness and humility. If we are upset by the violence and destruction in the Middle East, let us direct our energy to bring peace to the conflicts within our own families.
Metropolitan Tikhon of All America and Canada | 11 August 2014
His Beatitude, Metropolitan Tikhon, recently issued a Pastoral Letter Concerning Violence and Extremism in the Middle East. 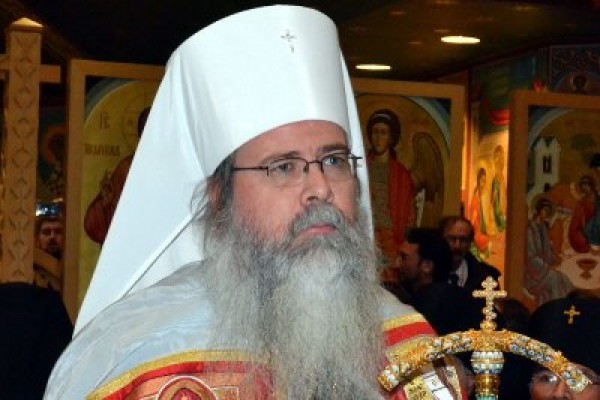 Our hearts have been deeply wounded by the stories and images of war and fighting throughout the world. The recent incidents of violence in the Middle East loom as tragic examples of an increasing disrespect for humanity and disregard for human life and dignity. The Orthodox Church in America joins those in the Middle East, in North America, and around the world who have raised their voices against the inhumane actions we are witnessing. We join all who condemn this blatant disregard for human dignity and life.

The Greek Orthodox Patriarchate of Antioch and All the East, whose ministry in the Middle East consistently witnesses to the Gospel of love of Jesus Christ and the Gospel’s command to adhere to peace and non-violence, has issued a strong statement condemning the attacks against Christians in Mosul, expressed in “coercion forcing them to change their belief, pay a tax or leave their homes, while having their property confiscated.” The statement calls on “states that provide fundamentalist groups with any direct or indirect foreign support to immediately stop all forms of material, logistic, military and moral support.”

The Orthodox Church in America expresses its solidarity with the Greek Orthodox Patriarchate of Antioch in its striving for non-violence and peace. We also express our solidarity with all the suffering Christian communities of Mosul, whose expulsion is ending the Christian presence there after nearly two thousand years.

Another story of violence is unfolding yet again between Israel and the Hamas organization in Gaza. In this violence hundreds of innocent civilians have already died, some of them Israelis, most of them Palestinians. This humanitarian catastrophe in Gaza is overwhelming; hundreds of thousands of innocent people are losing their homes and struggling to survive without electricity and water.

Yet another narrative of violence continues in Syria. Many innocent people not involved in the fighting have lost their lives. A large proportion of the Syrian population has taken to flight, forced to live in refugee camps in the region. Millions have lost their homes, their livelihoods and their loved ones.

Those of us living in North America may feel a sense of helplessness when seeing and hearing of these tragedies. We ought to remember the words of St John Cassian, who writes that the “goal of peaceful improvement cannot be reached through the decisions of others, which is forever beyond our control, but is found rather in our own attitude. To be free from wrath is not dependent on the perfection of others, but stems from our own virtue, which is acquired through our own tolerance, not other people’s patience.” (Institutes, VIII.17)

St John is pointing to a fundamental spiritual principle: that real change only begins when we look within our own hearts. Rather than feeling helpless in the face of world tragedies, we need to recall our unity with all of mankind and to respond with prayer for the suffering and the departed. In addition, just as the ascetic struggles of the great saints, in their own time and place, have a cosmic effect, so our own effort to purify our own hearts will have an effect on the rest of the world.

Thus, a very concrete and practical way that we in North America can respond to the violence in the Middle East is to commit ourselves to establishing peace in our own families and communities. When the Holy Apostle James posed the question: “What causes wars, and what causes fighting among you?”, he immediately answers with a challenge for us to consider: “Is it not your passions that are at war in your members?” (James 4:1).

If we are truly concerned about the strife in the world today, let us begin by overcoming anger in our own hearts by striving for meekness and humility. If we are upset by the violence and destruction in the Middle East, let us direct our energy to bring peace to the conflicts within our own families. If we are horrified by images of human beings injuring and killing one another, let us offer an image of Christ by giving alms to those in need in our own neighborhood.

In this way, our deeds will be joined to our prayers, and by the action of divine grace, we will have the assurance that our merciful Lord will grant consolation to those who are suffering, will provide a place of rest for those who have departed and will bestow upon the world the peace that passes all understanding.

+Tikhon
Archbishop of Washington
Metropolitan of All America and Canada

Yesterday, we witnessed, once again, another instance of terrible and absurd evil perpetrated against the most vulnerable of…