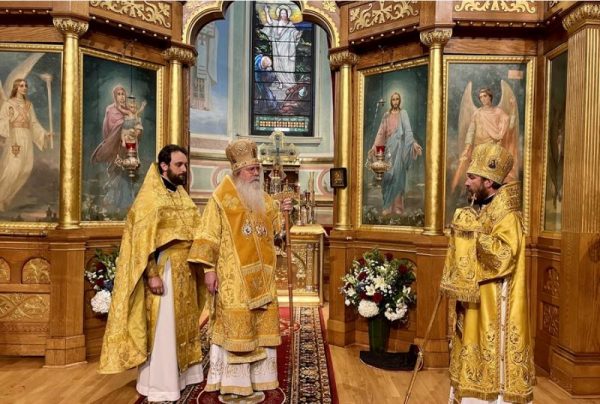 On Sunday, July 11, 2021, with the blessing of His Holiness Patriarch Kirill, His Beatitude Metropolitan Tikhon presided at the Divine Liturgy at New York City’s Saint Nicholas Patriarchal Cathedral in conjunction with the visit of His Eminence Hilarion (Alfeyev) Metropolitan of Volokolamsk and Chairman of the Department for External Church Relations of the Moscow Patriarchate.

Concelebrating with the two hierarchs were clergy of the Cathedral and Priest Alessandro Margheritino, Secretary of the Orthodox Church in America.

After the Divine Liturgy, the two hierarchs exchanged warm greetings, expressing joy at the opportunity to again enjoy communion and fellowship together after a hiatus due to the worldwide pandemic.

His Eminence Hilarion shared the brotherly greetings of His Holiness Patriarch Kirill, and presented His Beatitude with a gift from His Holiness. His Eminence pointed out that among the many events and celebrations affected by the pandemic was the 50th anniversary of the granting of autocephaly to the Orthodox Church in America. Metropolitan Hilarion noted how the Church in America is the fruit of missionary work of the Russian Orthodox Church, and in 1970 went from being a daughter Church to a beloved sister.

His Beatitude Metropolitan Tikhon thanked His Eminence for the warm hospitality and remarked how joyful it was to be at this historic Church built by Saint Tikhon, a beloved saint of both Churches. His Beatitude also noted that the saints of the day, the venerable Sergius and Herman, Wonderworkers of Valaam, are also beloved common saints. From the monastery in Valaam came Saint Herman of Alaska and his companions to plant seeds in America laying the foundations of what later grew into the autocephalous Orthodox Church in America.

The hierarchs were then hosted for lunch at the cathedral. At this time, they had fruitful discussions regarding various matters of mutual interest and concern.

Watch a recording of the Hierarchical Liturgy on the YouTube channel of Saint Nicholas Patriarchal Cathedral.