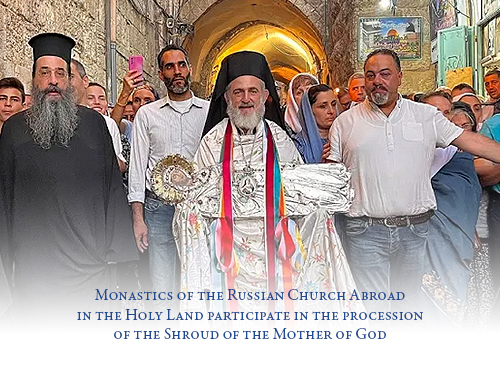 On Thursday morning, August 25, 2022, at 4 am, a procession took place with the shroud of the Most Holy Theotokos. According to the ustav of the Jerusalem Church, August 25 is considered the day of the Dormition of the Mother of God, and on August 15/28 the Holy Church commemorates the glorious bodily ascension to heaven of the Mother of God.

The procession began at the Gethsemane Compound, which stands opposite the Church of the Resurrection of the Lord. The Holy Shroud is kept in the church there. By 4 o’clock in the morning, numerous clergy, monastics and believers gathered. The Hegumen of Gethsemane, His Eminence Metropolitan Joachim of Helenopolis, came out with the shroud and the procession moved along the narrow streets of the old city in the direction of the Garden of Gethsemane to the Church of the Tomb of the Virgin. The procession is a commemoration of the burial cortege of the most pure body of the Mother of God by the Apostles from Zion to Gethsemane.

The prayer “Apostles from the ends of the Earth” was sung in different languages. Russian nuns and pilgrims sang in Church Slavonic, Romanians in Romanian, and the Greek clergy in Greek. The sight was breath-taking. Crowds of pilgrims, holding lit candles in their hands, followed the procession all the way to Gethsemane, where it arrived as as the sun was rising. Entering the temple, the shroud was placed on a stand where the worshipers can venerate it until the end of the feast, when it solemnly returns to the Gethsemane Compound.