One of the most famous monasteries of Montenegro – Praskvica Monastery – celebrates the 600th anniversary of its foundation. This is the oldest spiritual and religious complex which is inseparably linked with Russia. According to a legend, it was Russian monks who were among its founders and came and lived there through the ages.

Russia and Montenegro has had a long history of friendly relationships. Both countries adhere to the Orthodox Church which united them and today only strengthens their ties. Sinisha Smilich, one of the monastery’s priests said in an interview with the Voice of Russia. 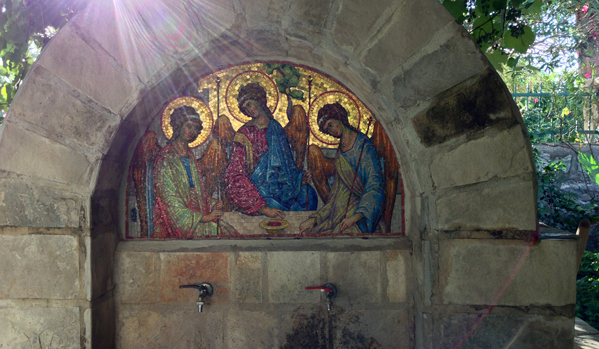 “This place is famous as many Russians came and come here and we, the locals, always did our best to make them feel comfortable. The fact that many churches and cathedrals are dedicated to Russian saints is another proof of our affection towards Russia. Sometimes we smile that there is a small Russia, here, on the Adriatic Sea. Our love to the Russian people may seem strange but it’s sincere,” he says.

Today Praskvica men’s monastery consists of two churches, the superior’s house and a library. Once it was much bigger but in 1812 Napoleon army soldiers destroyed it almost to the ground because the Serbian people sided with Russia which France was waging a war with at the time.

There is no exact date of the foundation of the monastery. The only thing known for sure is that governing back then Belša III charted the building of a church dedicated to St Nicholas the Wonderworker. The locals claim that “some Russian wandering monk” inspired him. It’s also known that in the 19th century Praskvica was reconstructed on the money from Russian humanitarians.

There is a touching legend handed over from generation to generation about a Russian hermit, Yegor Stroganov, and his daughter. The young woman run away from home and her father set off to faraway Montenegro to dedicate his life to prayers and hard labor. However, a few years after the girl regretted her behavior and, having disguised herself in men’s cloths, settled in Praskvica.

She revealed a secret only before her death. Since then local monks have been taking care of a modest tomb with only one inscription that reads ‘Yegor and Yelizaveta Stroganovy’.

Nevertheless, the monastery is not the only one where the memory about Russians is kept carefully. There are gifts from Russia in more than 600 monasteries throughout the country. Russian tsars loved the Montenegrin people and supported them the best they could.

For example, an icon presented by Alexander I is kept in Reževići monastery, not far from Praskvica, Archimandrite Khrizostom, the monastery’s superior told the Voice of Russia correspondent.

“One of the local priests from the village of Rževići was forced to flee to Russia as he had problems with the Austria-Hungary government which was oppressing us at the time. He became a priest for the Navy. After retiring he decided to build our monastery on his own money. Different people from Rus helped him with it,” the Archimandrite says.

Spiritual and cultural ties continue connecting Russia and Montenegro today. Many compatriots, residing in Montenegro or coming here on vacation, visit monasteries and contribute to the development with what they have.

Tatyana and her two daughters came to the country half a year ago. In order to distract themselves from bitter thoughts caused by the separation with their homeland, the women sing in Russian and Serbian in various Montenegrin churches and cathedrals, including Praskvica.

“Once we came when a service was being held and sang a liturgy in Russian. Then we began singing in Serbian. We learned Serbian and now sing in monasteries. The liturgy in Serbian differs from the Russian one by its tunefulness. It’s very beautiful. Serbians treat us very well and I’m sure that all of them love the Russian people. I don’t have a single Serbian or Montenegrin friend who doesn’t like Russians or Russia,” Tatyana says.

The main present for the 600th anniversary o the monastery is to be given t it later, when at the beginning of October Patriarch Kirill will visit Montenegro. Although he is not going to come to Praskvica, the monastery clergy will travel to the capital of the country to meet him. “We have to see him as he is like father to us,” Serbian monks smile shyly.