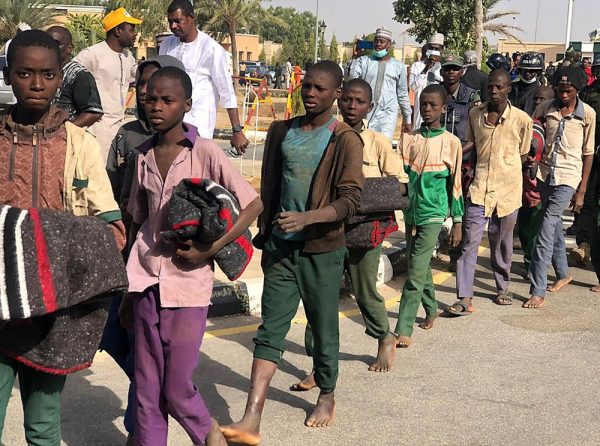 More than 300 schoolboys abducted last week by armed men in north-west Nigeria have been released, the Katsina State governor said.

Governor Aminu Bello Masari made the announcement on Nigerian state TV, NTA, from his office in Katsina State.

“At the moment 344 of the students have been released and handed over to the security operatives. I think we can say at least we have recovered most of the boys, if not all of them,” he said.

Arrangements are being made to transport them to Katsina, he said.

“The news reaching about an hour ago indicates that all of them have been recovered and they are on their way from the forest area to Katsina. By tomorrow we will get them medically examined and then arrangements will be on the way to reunite them with their families,” he added.

More than 800 students were at the Government Science Secondary School, Kankara, when it was attacked last week by armed men.

Hundreds escaped and it was believed there were more than 330 remaining in captivity.

He said the government will be “working with the police and also to engage private security firms to safeguard schools” to prevent the “ugly experience of the last six days”.

The news of the release of the schoolboys comes shortly after a video was released by the jihadist rebels of Boko Haram that purportedly shows the abducted boys.

The government had said it was negotiating with the attackers.

Most viewed articles
Hierarch from North Macedonia Gives Advice to the Ukrainian Orthodox Church91
Can God Break A Promise?82
Participating in God’s Vision78
Patriarch Kirill: Faith in the Lord Gives Us the Ability to Distinguish Between Good and Evil72
First Orthodox Prayer Book in Portuguese Published in Portugal71
Lessons from Saint Mary of Egypt54
Patriarch Kirill: We In No Way Question the Healing Power of the Holy Mysteries of Christ!48
Ethiopian Patriarch Thanks Patriarch Kirill For the Support During the Persecution33
Representative of Russian Patriarch Delivers Rehabilitation Facilities to Children in Syria29
Connected to Community1
Most popular authors
Pravmir.com team345
Fr. James Guirguis82
Priest Dustin Lyon78
Justin Doty54