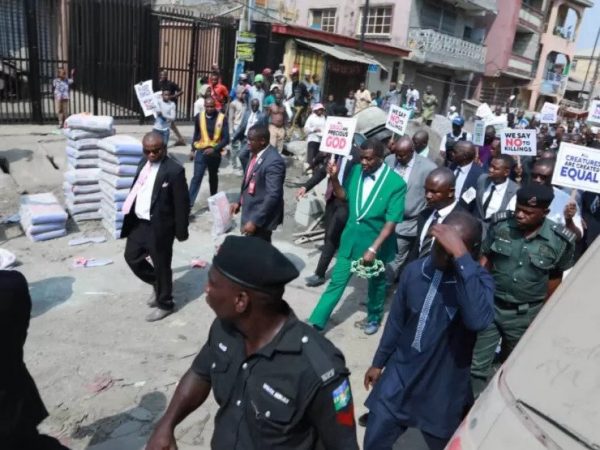 Millions of Nigerian Christians have taken to the streets in protest against an increase of violence perpetrated against their religious community.

The central march took place in Lagos and was led by Enoch Adeboye, the General Overseer of the Redeemed Christian Church of God (RCCG). Walking for three miles and followed by an enormous crowd, Adeboye could be seen holding a placard that declared: “All Souls are Precious to God.”

Prior to the march, the RCCG had been involved in a three-day fast organised by the Christian Association of Nigeria (CAN) in response to a spike in attacks against the Christian community at the hands of Islamic terror groups. The Lagos march was just one among several held across 28 of Nigeria’s 36 states – CAN estimated that a total of around 5 million people turned out for the demonstrations.

“Though we have protested before, this event took a new dimension,” CAN president Samson Ayokunle told Christianity Today.

“With one voice, we said ‘no’ to killings, ‘no’ to security negligence, and ‘no’ to the persecution of Christians in Nigeria. It is a wake-up call to the government.”

President Buhari has faced fierce criticism for his lack of decisive action against the various Islamist groups that have been wreaking havoc against the Christian community over the past several years.

“Lord, have mercy on Nigeria, let there be peace and security,” Adeboye prayed during the huge event. “God sees all things and knows where the terrorists are hiding.

“We pray that God send his light to Nigeria and expose the evildoers in the country.”

There have been a number of recent attacks that have sparked large scale media interest in the plight of Christians in Nigeria. Indeed, just last month a Brethren pastor named Lawan Andimi was beheaded by Boko Haram fighters shortly after being seen in a hostage video in which he stated that he had resigned his fate to “the will of God”. It was widely reported that the terrorists executed Andimi because he refused to denounce his faith in Christ.

Terrorist attacks, mostly perpetrated by groups like Boko Haram and Islamist Fulani herdsmen, have resulted in the deaths of over 100 people in January alone. In December, the Humanitarian Aid Relief Trust (HART), led by Baroness Cox, released a report estimating that some 1,000 Nigerian Christians were killed over the course of 2019.