Moscow iconographers to restore frescoes in the Garrison Cathedral in Brest 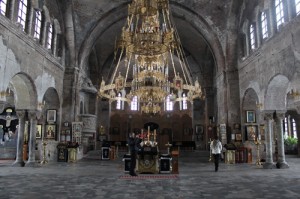 The idea arose on March 11 at the opening of an exhibition of battle scenes by studio painters of in the Art Museum, located in the southern barracks of the fortress. The studio director Gennady Sokolov was much impressed by the fortress, including the Garrison Cathedral. Help was offered to restore the paintings on the walls and ceilings of the Church. Only fragments survive. The initiative was supported by the Russian Consul General in Brest, Nikita Matkovsky. Nikita Nikolaevich stressed: “The fortress in Brest is the common heritage of both the Belorussian and Russian peoples. We have a moral duty to preserve this holy place for our descendants. Wherever it is possible to restore what has been lost, it must be restored. The recreation of paintings inside the Cathedral is one example. I am very glad that the idea was put forward by the Grekov Studio who are true specialists. Amateurs should not be allowed to approach such a place”.

On Wednesday March 20, icon restorers from Moscow, members of the Grekov Moscow military painters’ Studio, took measurements in the St. Nicholas Garrison Cathedral in the fortress in Brest. As a result of this work, the wall paintings in the Cathedral can be restored, reports the Pravoslavie.by website.

After Brest, the restorers face painstaking work in the records in Moscow and St Petersburg—it may be possible to find photographs or drawings depicting the Cathedral interior. In any case, the new wall paintings will match the authentic ones as far as possible. As a result of the research a design for the restoration of the wall paintings will be drawn up, using 3D technology.

If restoration does take place, it will be carried out using a “silicate painting” technique. This technique uses porous material on a liquid glass base, which is impervious to moisture and will not let the painting crumble.

The Garrison Cathedral was built between 1856 and 1879 according to the design by the outstanding Russian architect, one of the founders of so called “Russian” or “Byzantine” style, David Grimm (1823-1898). Grimm designed many other projects in St Petersburg, Tbilisi, Sevastopol, Livadia, Zhitomir and other cities of the Russian Empire, as well as in Copenhagen, Geneva, Nice and Bethlehem. The Brest Garrison Cathedral was one of the largest buildings of this type.

Interestingly, it was precisely in this Cathedral that Emperor Alexander III celebrated his namesday in August 1886. Almost all the members of the Imperial Family were present, including the heir—the future Emperor Nicholas II, and the court. The future Kaiser, Wilhelm II, then heir to the German throne, also visited Brest as a distinguished guest. After nearly 30 years, having come to power, World War I was unleashed, but in front of the photographers in Brest Nicholas II was dressed in a Prussian officer’s full-dress uniform, and Wilhelm in a Russian one.

After the First World War, when Brest was occupied by Poland, the Orthodox Church was converted into a Catholic Church. In 1939, after the arrival of the Red Army, the Church was used as a Red Army club. On June 22, 1941, during the heroic defence of the fortress against the Germans, the building changed hands several times. The Cathedral was seriously damaged but not destroyed. After the war it long stood unrestored, but was included in the memorial complex called, “The Fortress of the Heroic City of Brest”, which saved it from demolition. In 1994 the Church was returned to the faithful and its gradual restoration began; the golden dome began to shine over the Cathedral again and the peal of bells returned. Interior work continues to this day, even though services are celebrated regularly.