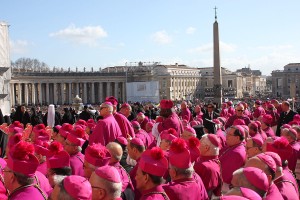 On March 19, 2013, a delegation of the Moscow Patriarchate led by the chairman of the Department for External Church Relations, Metropolitan Hilarion of Volokolamsk, attended the enthronement of Pope Francis of Rome, which took place on St. Peter’s Square in Rome.

The delegation included Metropolitan Antony of Borispol, chancellor of the Ukrainian Orthodox Church; Metropolitan Platon of Feodosia and Kerch; Bishop Sergiy of Solnechnogorsk, head of the Moscow Patriarchate administrative secretariat; and Hieromonk Antony (Sevryuk), rector of the church of the Holy Protomartyr Catherine in Rome. The delegation is accompanied by Rev. Milan Zust of the Pontifical Council for Promoting Christian Unity, and M. Palacio, DECR staff member.

Present at the ceremony of enthronement were His Holiness Patriarch Bartholomew of Constantinople, His Beatitude Tikhon, Archbishop of Washington and Metropolitan of All America and Canada; Supreme Catholicons-Patriarch of All Armenians Karekin II, as well as delegations from Local Orthodox Churches, representatives of the Anglican Communion churches, various Protestant denominations and other religious confessions. There were 132 representatives of states including heads of states and governments who have diplomatic relations with the Vatican. The Russian Federation was represented at the ceremony by Sergey Naryshkin, chairman of the State Duma.

The solemn ceremony began with presentation of the papal insignia to the newly-elected pontiff. Cardinal Protodeacon Jean-Louis Tauran placed the pallium (omophoros) on the pontiff’s shoulders, and Cardinal Angelo Sodano, Dean of the College of Cardinals, placed upon his finger the fisherman’s ring with an image of St. Peter. Then Pope Francis, assisted by cardinals, celebrated the mass in Latin. Some prayers and readings were pronounced in Italian, English, French, Greek and other languages. After the Reading of the Gospel, Pope Francis addressed himself to the hundreds-of-thousands-strong crowd in St. Peter’s Square with a sermon devoted to St. Joseph the Worker whose memory falls in the Catholic calendar on March 19. After the singing of the Lord’s Prayer, Patriarch Bartholomew and Catholicos-Patriarch Karekin II came up to the pontiff to exchange kiss of peace with him. The service ended with the solemn singing of the Latin hymn ‘Salve, Regina’ (‘Rejoice, O Queen’) devoted to the Most Holy Mother of God.